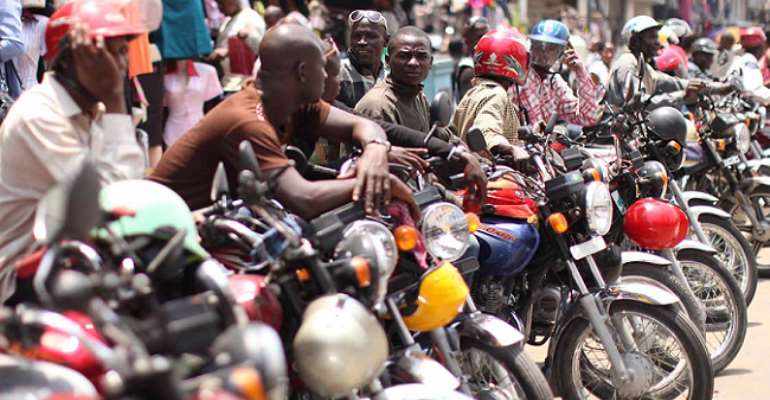 The Chairman of Parliament's Roads and Transport Committee, Samuel Ayeh-Paye has accused the former President John Dramani Mahama of acting hypocritically in his promise to legalise the commercial use of motorcycles popularly called 'okada' in Ghana.

According to the Member of Parliament for Ayensuano Constituency, the NDC was in power when L.I 2180 was passed, banning the commercial use of motorcycles and thus their sudden u-turn can only be interpreted as an attempt to convince the ‘okada’ riders to vote for them.

The use of motorbikes and tricycles for commercial purposes in any form is currently against Ghana's Road Traffic Regulations 2012 (L.I 2180).

However, the NDC flagbearer, John Mahama in an address to chiefs and people of Kpando in the Volta Region as part of his tour of the region said he recognizes the benefits of the ' okada' business to the many families that depend on it and thus he intends to legalize and regularize its use.

Speaking on Eyewitness News, Samuel Ayeh-Paye also indicated that the Roads and Transport Committee of Parliament was already working on regularizing the use of ‘okada’.

“That law was passed by the NDC in 2012 in parliament, so what are they telling Ghanaians today? That when they come, they will change the law and legalize okada simply because they want those okada riders to vote for them. If they think that the okada is something that has come to stay and they want to legalize it, they need not to ask the okada people to vote for them before they legalize it.

“Meanwhile, the riders have already petitioned the committee and the committee is going to sit down with them and look at it. And the ranking member was on the committee when the petition came and we all shared ideas on how we should handle the okada issue, today because they want votes they are saying when they come to power, we will legalize okada for them.”

Meanwhile, a Ranking Member for Parliament's Roads and Transport Committee, Governs Kwame Agbodza says the promise by the NDC flagbearer John Mahama to regularize the operations of commercial motorbike riders is apt and in the right direction.

According to him, the decision shows that the former president is in tune with the realities of the times.

Speaking on Eyewitness News, the Adaklu MP said the existing law that barred people from using motorbikes for commercial purposes has lost its usefulness and must be reviewed.

“Although it is not allowed and people are using it and getting injured. We should rather go back, look at the law, regulate the operations and make it safer so that people can safely be trained and to engage in genuine and legal business by conducting it as a means of transport,” he said.