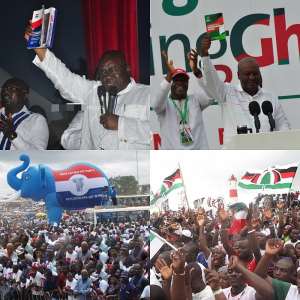 Ghana goes to the polls to elect a President and Members of Parliament in December 2020. It will be the country’s eighth successive general election since the resumption of multiparty democracy in 1992. Verily, power alternates between two main political parties, namely the National Democratic Congress (NDC) and the New Patriotic Party (NPP).

Political party manifestos form the key policy intentions of political parties in an election. Inasmuch as manifestos have become key documents worthy of consideration in a democratic dispensation, it is prudent that politicians put into action their manifestos.

Like elsewhere in the world, manifestos remain indispensable ingredients for participatory, transparent and accountable governance. Party manifestos are the tools for holding political parties to account during their terms in office, and therefore, very imperative for development. No wonder, political watchers like IMANI, CDD, IDEC among others placed much premium on it. It is the projects and promises captured in the party manifesto that are translated into the government policy when a party is given the nod. Are politicians practicalizing their manifestos?

Undoubtedly, this year’s December 2020 election will have achievement as one of the indicators which electorates will use as a basis to cast their votes. The cacophony surrounding political party manifestos intertwined with sweet words capable of healing wounds and serving as lullaby for babies has necessitated the writing of this article. Let's put our political affiliations aside for a minute and think Ghana while reading this document. I have keenly observed and noticed that a trend is developing as we approach election 2020. The leading political parties have started promising "heaven and earth". Some of these promises are making my stomach turn and filling my ink with so much venom.

As political parties spell out their programmes for development as enshrined in their manifestos, it would be appropriate to actuate and fulfill those promises when given the mandate to govern.

First of all, permit me to briefly recap that the National Development Planning Commission (NDPC) was established under Articles 86 and 87 of the 1992 Constitution of Ghana as part of the executive; with the NDPC Act, 1994 (Act 479) providing the core legal framework for the establishment of the Commission and the performance of its functions.

In line with the provision under Article 87 of the Constitution, the core mandate of the Commission is to "advise the President on development planning policy and strategy" and, “at the request of the President or Parliament, or on its own initiative,” perform five primary functions; studying and making strategic analyses of macro-economic and structural reform options, making proposals for the development of multi-year rolling plans, taking into consideration the resource potential and comparative advantage of the different districts of Ghana among others. The Commission is made up of three technical divisions in the space of development policy, plan coordination, monitoring and evaluation and a fourth division responsible for administration.

Imperatively, Article 34 says “the directive principles of State Policy shall guide all citizens, Parliament, President, Judiciary, Council of State, Cabinet, Political Parties and other bodies in applying or interpreting the constitution and in making any policy decision for the establishment of a just and free society”.

Once you're done reading all of these, the obvious question that pops up will be, “why are political parties not presenting manifestos on how they hope to work closely with the National Development Planning Commission this goal through a “National Manifesto”?

In the fourth republic where manifesto messages wield great influence on the electoral fortunes of political parties, it's been reduced to a mere rhetoric to hoodwink the unsuspecting electorates. Ghana would have become paradise on earth by now assuming politicians remained truthful and fruitful to their promises. From my standpoint, promises made by politicians are just like parallel lines on a plane. They're good at making lofty promises to amass wealth, thereafter, with impunity and without regret, once the election is over.

It is an indisputable fact that, some politicians have managed to implement at least a fraction of their plans they promised in their election manifestos, still and all, observers are apprehensive that the ardor with which manifestos are propagated prior to elections and the situation on the ground is different as palm wine is from red. This has continued over the years where politicians used this document as a decoy in winning political power. Trust you me, voters never get the opportunity to even glance through the document until elections are over and beyond. Similarly, after the victory in elections, the party which gets the mandate to govern forgets to put into practice what it promised to do before the elections.

They not only promote issue-based politicking during the electioneering period but lie at the heart of peaceful campaigns. Given that manifestos tend to encapsulate the key issues or problems that confront Ghana and demonstrate the pathways to tackling them, they have become the principal instrument against the reference point of the parties' engagements with the voters. Even though as a key political product, manifestos create the platform on which political parties and politicians who looking for electoral mandates set out their proposed responses to social needs and demands from the electorate, it's paramount that their manifestos reflect performance rather than thought or ideas read.

Alongside campaigns being dominated by non-issues such as insults, extreme propaganda, mudslinging and personal attacks. Politicians use manifestos as attractiveness and lure to modern voters, particularly the youth. The claim is that, the youth in Africa and in Ghana in particular, are seeking solutions to the socio-economic problems confronting them. Meanwhile, they win and there's a disbelief that the document cannot be used to rectify their ills.

In Ghana, the capacity to win elections has been amply demonstrated by the NDC and NPP over and over again. Now, the capacity to deliver on the transformational agenda when either of them or one of the alternative parties wins is the question we're invited to answer. In this regard, the indicators that produce our leaders must themselves have the capacity to know and to deliver the quality of leaders required for the task nation building and not nation breaking.

However, we've seen lately in this country how the major political parties; thus NPP and NDC have been committed to fulfilling their manifesto promises and have even become clueless of contents of national development plans.

Against all factors, these parties have come to realise that at the satisfactory delivery of their campaign promises which are contained in their manifesto books often branded in blue for NPP and green for the NDC, Ghanaian electorates will renew their given tenures of four years. For this reason when these parties which have become the necessary evils of our democracy come to government they pay less attention to a national development plan.

We must demand that politicians present on how they intend to implement plans of the National Development Planning Commission and Chapter Six of the 1992 Constitution, so that this becomes constitutionally and legally binding on the political party which shall emerge victorious after the election. What this means is that, what is now looked upon as a mere moral responsibility must be tied to the Constitution just like how a tight cord.

This will ensure that no politician or party downplays on voters' intelligence as well as ensure that new governments do not truncate projects initiated by their predecessors as provided in Article 35 (7 & 8) of the constitution where it states that inter-alia, "As far as practicable, a government shall continue and execute policies and programmes commenced by the previous government".

It is rewarding for politicians or political parties to be realistic and pragmatic in presenting their manifestos and promises only on what they can implement in accordance with Chapter 6 of the Constitution. Ghanaians should also endeavour to vote for a political party with the wherewithal and capability to improve their standard of living and not just a party they think could win an election based on fiscal allurements, worldly freebies or money received.

Don't you think that democracy in Africa and for that matter Ghana, needs truth we'll be fine? Dear politicians, your manifestos should make the know-hows, attitudes, and PRACTICES visible to the blind and audible to the deaf. Don't fail to tell Ghanaians what you cannot do and refuse to tell us what you can do.