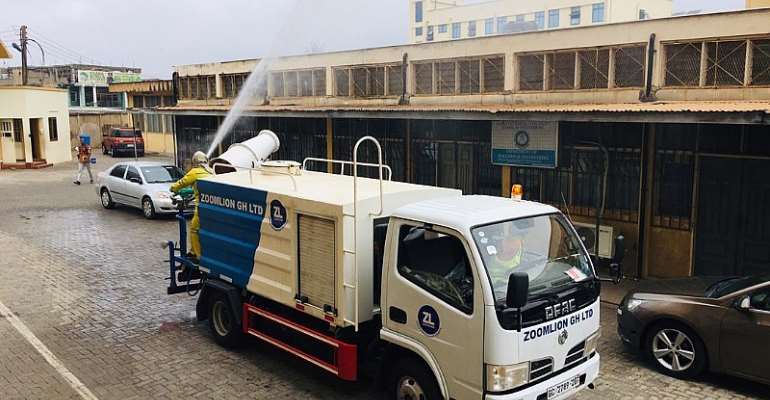 The nationwide exercise kick-started on Friday simultaneously in about five regions. These were the Greater Accra, Central, Volta, Northern, Western and Ashanti Regions.

The exercise will cover pyrotechnic universities, health facilities in addition to all public and private tertiary institutions, and it forms part of the central government’s continuous measures at containing the spread of the new coronavirus disease (COVID-19). Final year students of tertiary institutions completed the academic year by writing their final exams on Friday, and that facilitated the exercise.

Addressing the media on the sidelines of the exercise, the Greater Accra Regional Manager of ZGL, Mr Ernest Morgan Acquah, disclosed that his outfit was expected to disinfect about eighty-six (86) tertiary institutions in the country.

According to him, his outfit complete the national exercise before next week Monday.

In addition to the disinfection, Mr. Morgan Acquah reiterated the need for the students and the authorities in the tertiary institutions to continue observing the COVID-19 preventive measures.

And though he said it was encouraging that the country's active cases had reduced drastically, he advised that it should not be a reason for "us to lose our guard."

At the Catholic Institute of Business Technology (CIBT) near the Information Ministry, the Registrar, Mr. Perry Ofosu, applauded the government's collaborative effort with Zoomlion to fight the virus.

The registrar of CIBT who was excited about the second disinfection exercise in his school averred that they had put in place adequate safety measures to receive the continuing students on Monday.

These measures, he said, included placing Veronica buckets at vantage points and ensuring that the students observe social/physical distancing.

The exercise will continue tomorrow and end on Sunday.