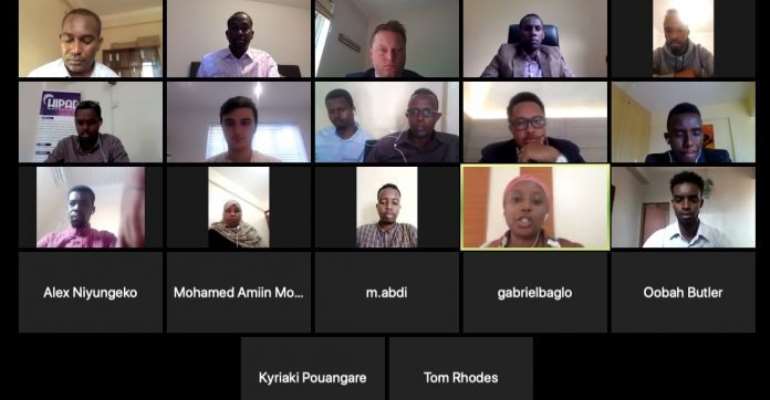 SJS submits communications concerning the attacks on journalism in Somalia to the United Nations Bodies. An online launch for the submissions was held on Thursday, 20 August, 2020. | PHOTO/SJS.

Somali Journalists Syndicate (SJS) submits Communications to the United Nation’s Independent Expert on Human Rights in Somalia, Human Rights Council, and Special Rapporteur on Freedom of Opinion and Expression concerning the attacks on journalism in Somalia.

The Somali Journalists Syndicate (“SJS”) has instructed international human rights barrister Michael Polak of Church Court Chambers and Director of Justice Abroad to submit formal communications and complaints with United Nation’s Bodies for the Independent Expert on the Situation of Human Rights in Somalia, the Human Rights Council, and the Special Rapporteur on the Promotion and Protection of the Right to Freedom of Opinion and Expression regarding the attacks against journalists in Somalia and the failure to protect the right to Freedom of Expression which includes the right to receive information as well as the right to provide it.

The submissions which have been sent to the UN Bodies today, 20 August 2020, set out a range of acts which show that the Somali authorities have acted in breach of both their positive and negative obligations by attacking journalism through a number of acts and failing to protect journalists and create an environment conducive to freedom of expression within Somalia. The evidence presented to the UN bodies shows that the authorities are in breach of both their international obligations and obligations under the Somalian Constitution by:

These communications call on the Independent Expert on the Situation of Human Rights in Somalia, the Human Rights Council, and the Special Rapporteur for the Protection of the Right to Freedom of Opinion and Expression to require the Somalian authorities to:

Annexed to the complaints was the SJS’s comprehensive report which sets out the evidence in regards to the attacks on journalism in Somalia for 2019 as well as an annex showing that such behaviour continues in 2020 by the Somalian Government and Somaliland authorities.

_“The freedom of journalists to do their job without having to fear attacks and repression by the authorities is essential for the development of any country. The clear evidence shows that the Somalian Government and Somaliland authorities are failing to comply with their international and domestic legal obligations by continuing to attack, arbitrarily detain, and censure brave hardworking Somalian journalists. _

We hope that these communications to the United Nation’s bodies, which have been set up specifically to protect people in situations where State authorities are refusing to do so, will shine a light on what is taking place against journalists in Somalia and inform the authorities that their actions are being noted both by the Somali people and the international community.

We call on the international community, including NGO’s and Somalia’s development partners, not to forget the importance of journalism in Somalia and the vulnerability of journalists there. It is our obligation to give them a voice at every opportunity and to demand that the authorities cease to breach their international obligations and the Constitution of Somalia.’

“Attacks against the press has dramatically increased leading many journalists to self-censor or face arbitrary arrests. Press freedom and freedom of expression are basic constitutional right entitled to every Somali citizen. These rights must be preserved and protected in order for the journalists and media stations to be able to freely inform the public.

SJS has documented the violations against the press across Somalia round the clock and what we have been witnessing, if not stopped, would put the whole journalism profession in danger. We call on the Somali federal government, federal member states and Somaliland authorities to stop the gross violations committed by their security forces, police and organs of their administrations.”

An online launch has been held today at 2pm BST/4pm Somalia Time, which can be viewed here