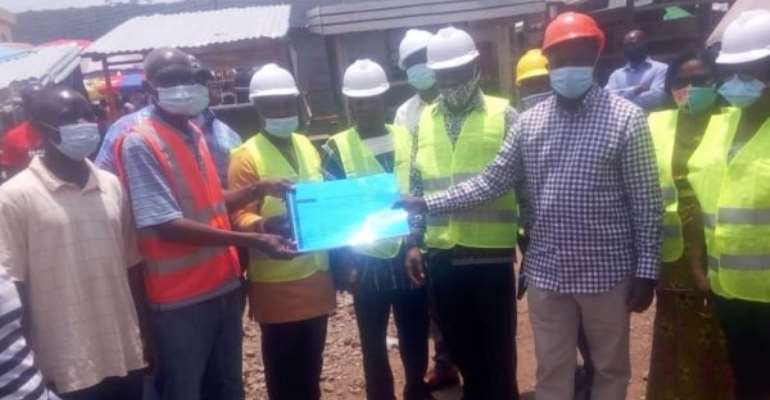 The Ho Municipal Assembly Tender Committee has awarded a contract for works to commence on a 142-unit modern store at the cost of GHC 9.3 Million.

The project would help to expand the Central market and create a greater enabling environment for doing business.

It is a 'Secondary City Project' with funding from the Ministry of Local Government and Rural Development and is being undertaken in 25 Municipal and District Assemblies, including Ho.

The project, awarded to Messrs Omega A. Company Limited and Messrs Silver Cross Estate Developers Company Limited, is in two lots and expected to be completed in eight and half months.

The Lot 1 comprises a two-storey facility with 58-units of shops, restaurants and other ancillary facilities will be executed by Messrs Omega A. Company Limited at a total cost of more than GH¢ 3.7million.

Messrs Silver Cross Estate Developers Company Limited would construct Lot 2, made up of two-storey block with 84-unit shops and other ancillary facilities at a total cost of more than GH¢ 5.6million.

Mr Prosper Pi-Bansah, the Ho Municipal Chief Executive (MCE), who disclosed this in an interview with the Ghana News Agency after handing over the project document to the contractors, said the facility would help decongest the market and improve accessibility.

The MCE said the facility when completed would secure the wares of traders from theft and bring some sanity to the market.

The MCE said the Assembly had given the traders, currently operating from the project site, a new location to continue with their business.

Mr Francis Arthur, the project consultant, said his outfit would monitor the progress of the project to ensure it was done effectively to benefit the people.

He urged the contractors to strictly adhere to the scope of the contract, especially specifications, to ensure that they deliver according to requirements in the contract document.

Mr Issac Adza Tettey, the Regional Economic Planning Officer, said the project had come at an opportune time to enhance the growth and development of the local economy.

Mr Benjamin Kpodo, the Member of Parliament for Ho Central, warned against the sale of materials meant for development projects, saying such an act was not helpful for the country's progress.

"It was fantastic experience to serve under President Nana-A...
47 minutes ago