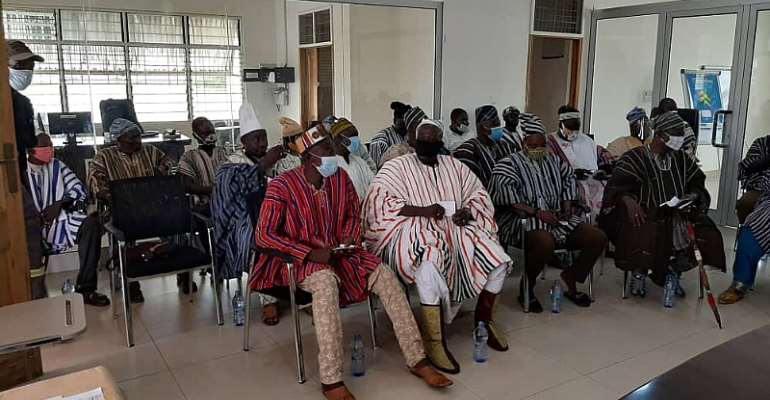 The newly constructed Business Resource Centre in the Wa Municipality would soon be opened to provide business advisory and training services to prospective clients within the operational area.

General Manager of the BRC, Abu Ibrahim Tamaah made this disclosure at a stakeholder consultation meeting with chiefs in the Waala Traditional Area organized by the centre at the office space in Wa.

Addressing the chiefs at the meeting, Mr Tamaah indicated that many businesses in the region require a lot of capacity building training and funding to be able to grow and expand, therefore the need to establish a centre in the municipality. He mentioned that plans were far ahead to begin operations within the shortest time.

"We are kicking off as soon as possible, that's why we are seeking the blessings of the chiefs. After mobilising some few clients and assessing the health status of their businesses and discovering the potentials in them, we will help them to write business plans and connect them to get credit for their businesses".

Pikpong Naa, Badiu Adams, a divisional chief who spoke to the media after the meeting said they were elated about the initiative but quickly expressed worry about how the centre would recover their loans when disbursements begin. He recounted a difficult situation of some companies whose loans went bad some time ago, leading to their collapse. He was hopeful however, that with the support and cooperation of the chiefs, the operations of the centre would be successful.

Naa Jafah Natasung Pelpuo, divisional chief of Bihee appealed on behalf of his colleagues to the centre to be fair and just in their operations indicating that priority must be given to the less privileged rather than allowing politicians and high profile personalities to takeover the loan scheme.

The Business Resource Centre is mandated to promote and support the national industrialization agenda of the Akufo-Addo government and will serve as a one-stop-shop for business development and investment in the operational zone of the centre.

It will also serve as information centres, which will provide a full range of world-class business development services to potential and existing entrepreneurs in the Wa Municipal, Wa East and Wa West Districts.

It will be recalled that in November last year, the Minister for Trade and Industry, Hon. Alan Kyerematen, indicated that "the BRCs will offer support services to contribute to the One-District-One Factory initiative, including adopting a more transformative approach to strategically integrating rural informal smallholder raw material supply base into corporate entities along various commodity value chains that have been identified to be relevant the 1D1F projects."

The Minister for Trade added that "it would also serve as the intermediaries to facilitate the organisation and establishment of the relationship between various actors in these value chains."

With all districts in the country going to be beneficiaries of the newly constructed and equipped BRCs, Alan Kyerematen stressed that "Ghanaians will begin to understand that this government is serious about developing the private sector at the district level to help us address this challenge of unemployment."

The operations of the BRCs will be regulated by the National Board for Small-Scale Industries.

"We need the hand of God like never before against economy d...
33 minutes ago