Our Commitment To Ending Saiko Is Very Strong - Akufo-Addo 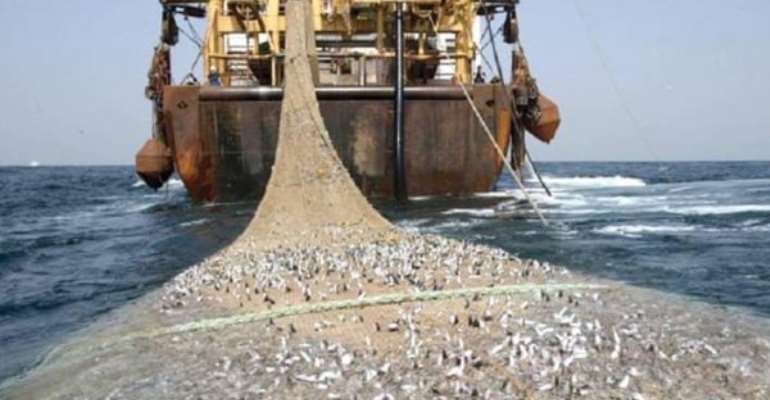 President Akufo-Addo has pledged his government's commitment to ending the illegal trans-shipment at sea, popularly known as “Saiko,” which has become rife on Ghana's waters.

Saiko is a severely destructive form of illegal fishing where industrial trawlers target the staple catch of small-scale canoe fishers and transfer it to specially adapted boats at sea for sale at local markets.

Despite the fact that Ghana's fishing laws prohibits the act, it is still rife and the operators, largely Chinese vessels, actively engaged in it with impunity while artisanal fishers continued to experience first-hand effects of the destructive practice.

Speaking on why the practice persisted, President Akufo-Addo said law enforcement agencies, over the years, had not been effectively equipped with the right resources and capacity to deal with the issue.

“Our commitment is strong and in these times we have also got the tools to back our commitment,” the President said while accusing the previous administration of not doing anything to equip the law enforcement agencies to deal with the problem.

“There were no serviceable patrol boats available to the Marine Police and law enforcement agencies so no matter how you protest you did not have the means to do anything about it,” he said.

“Today, we have three marine boats, ordered six more and full operation base has also procured 10 fast boats, which is going to strengthen the capacity of the marine police to be able to do the work. That is why we are beginning to see arrest.”

President Akufo-Addo said strengthening the capacity of the law enforcers was fundamental to fighting Saiko and that the Government would continue to equip them to be able to do their work.

He said it would be difficult to stop fishmongers and those who patronised Saiko fish until those engaging in the act on the high seas were stopped.

“We have to cut off the supply and that means winning the fight across the high sea and making it difficult for the Saiko activities to continue,” he said.

He underscored the arrest and prosecution of some fishermen engaged in the practice as clear indication of government's relentless efforts in curbing the menace.

As part of efforts to deal with the surge in illegal fishing, the President said government was working to address the deficiencies in the fisheries laws to make it much stronger.

Additionally, it was engaging fishermen and sentitising them about the dangers of illegal trans-shipment.