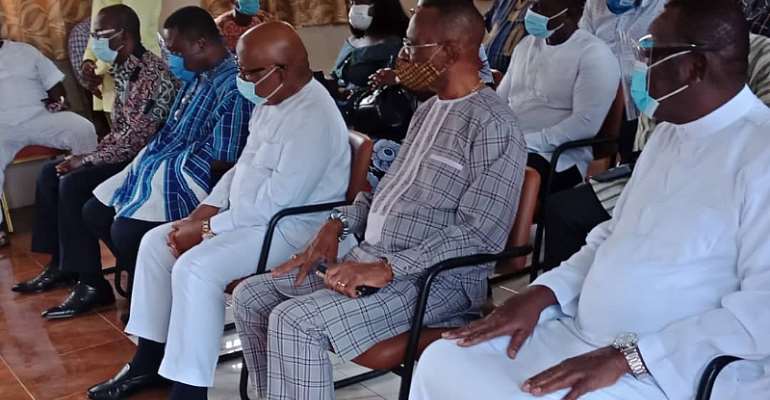 Some Executives of the Greater Accra Regional body of the New Patriotic Party (NPP) on Thursday, 20th August, 2020 paid a visit to the "Ga Mantse" palace in Accra.

The visit which was led by the speaker of Parliament, Rt. Hon.Prof. Aaron Mike Oquaye was to officially introduce the newly elected leaders of the regional wing of the party to the overlord of the land and seek his blessings.

The Regional Chairman of the NPP Mr Divine Otoo Agorhom, in an exclusive interview with this portal after the meeting, stated that it was necessary for the campaign team of the party to pay homage to the rulers of the land ahead of the December 2020 general elections.

"After our regional election on Wednesday, the council of elders thought it wise to pay a special visit to the overlord of the land, this was also important because they are the owners of the land and we needed their blessing before we begin our campaign tour," Mr Divine stated.

He stressed that, "The interaction was a success and the Ga Mantse and his entourage gave us their blessings and has assured us of their strong support during and after the campaign and the elections."

He however, urged Ghanaians to cast their vote for Nana Akufo Addo come December 7 in order to continue the developmental works he has started.

"We want to encourage Ghanaians to do the right thing and vote for Nana Akufo Addo, because if you look at the wonderful works he is doing, building of schools, hospitals, roads, restoring of teachers and nurses allowance, creating jobs for the youths and others.

"His Excellency Nana Akufo Addo has done a lot for Ghana and we urge all to give him the renewal. We the regional executives across the country are also doing the needful, so I am sure Ghanaians will look at the good works of NPP and give us another term," he posited.

The former Member of Parliament for Ayawaso Central under Kufour's administration Sheikh I.C Quaye, who also led the delegation stated that the NPP will keep working together with the chiefs and kings before and after the elections.

"We are here to introduce ourselves and moreover we will still keep working with all the overlords of the land and this, we will make sure that there is peace among the chiefs.

"When I was the Regional minister, we made sure we restored all the lands that were taken by unknown people, we have been able to reclaim some and it will continue," Sheikh I.C Quaye intimated.

The speaker of Parliament Rt. Hon. Prof. Aaron Mike Oquaye, in his speech, advised the chiefs to stay focused and help push the agenda of the NPP and Nana Akufo-Addo.

"We want to let you know that we are one and don't allow anyone to mislead you. Let us all walk the talk together. If you look at the transparency and good works of President Akufo Addo, you will all testify. So let us all embrace each other, we will work with you and make the Ga Traditional council proud. We will involve you in all our activities and I think these will make us grow together," Rt. Hon. Prof. Aaron Mike Oquaye stressed.

The "Ga Mantse" in his remarks acknowledged the efforts of the regional executives of the NPP and advised its members to keep a cool and peaceful campaign as well as the elections.