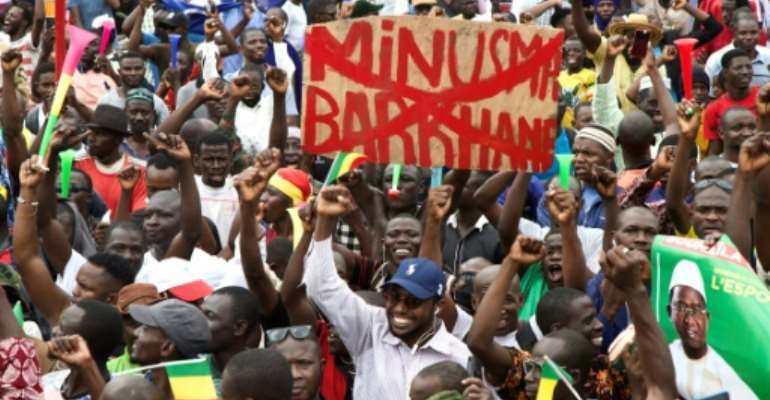 A placard in the crowd reflects opposition to the UN peacekeeping mission in Mali, MINUSMA, and France's anti-jihadist force, Barkhane. By ANNIE RISEMBERG (AFP)

Opposition supporters flooded into Bamako's central square on Friday to celebrate the military overthrow of President Ibrahim Boubacar Keita, which their leaders hailed as the "victory of the Malian people".

Thousands gathered in the capital's Independence Square, the birthplace of a months-long protest movement, many of them draped in Mali's national flag and blasting on vuvuzela horns.

They rallied three days after mutinying troops seized the country's 75-year-old president, forced him to announce his resignation and unveiled a junta that would rule until a "transitional president" takes over.

In contrast to fierce condemnation abroad at the overthrow of an elected leader, many in the rally were jubilant at the change.

It came after months of protests, staged by a loose coalition called the June 5 Movement, that were fuelled by anger at Keita's failure to stem a bloody jihadist insurgency, revive the economy and tackle corruption.

"I am overjoyed! We won. We came here to thank all the people of Mali, because this is the victory of the people," said opposition supporter Mariam Cisse, 38.

"IBK has failed," he said, using a common reference to the ousted president by his initials. "The people are victorious."

The rally had initially been called as a protest against President Keita. After his ouster, it was recast as an act of celebration. By ANNIE RISEMBERG (AFP)

But, he cautioned, "the military should not be thinking now that they can stay in power."

Friday's "victory rallies" had initially been scheduled as the latest round of protests to force out Keita by the June 5 Movement, also called the M5-RFP.

The movement -- a loose alliance of parties, religious leaders and grassroots groups -- has given a broad welcome to the president's fall.

Keita, who was elected for a second five-year term in 2018, announced his resignation early Wednesday, saying he had been given no other choice and wanted to avoid bloodshed.

The June 5 Movement, in its first reaction, said it "took note of the (junta's) commitment" for a civilian transition and promised to work with it on "developing a roadmap".

Some of the placards brandished in the rally reflected resentment at perceived foreign interference in Mali's affairs.

One read, "ECOWAS, a union of heads of state serving personal interests," a reference to the 15-nation regional bloc that has led the condemnation of the coup and stands by Keita.

The bloc is to send envoys on Saturday, led by former Nigerian president Goodluck Jonathan.