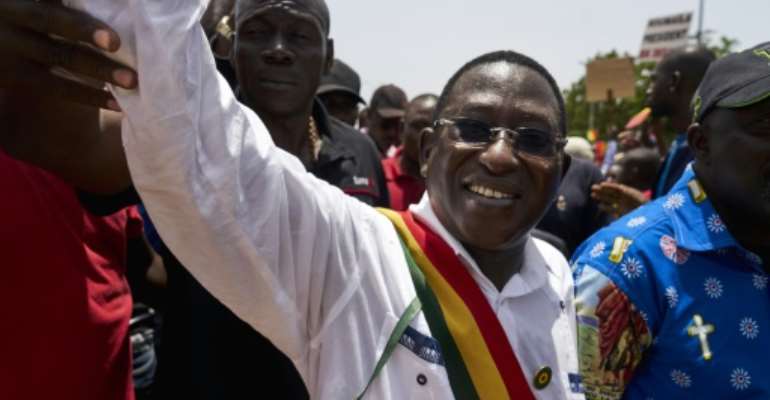 Soumaila Cisse greets supporters on a march in Bamako in 2018. By MICHELE CATTANI (AFP)

Malian opposition leader Soumaila Cisse, who was kidnapped in March in a jihadist-ridden area ahead of key elections, has sent letters to his family, in their first contact since the abduction, the Red Cross said on Friday.

"The ICRC (International Committee of the Red Cross) has handed letters from Mr Soumaila Cisse to a member of his family. After many months without contact, to be able to get news of a loved one is of invaluable comfort for the family," the ICRC said in a statement from Bamako.

Cisse, the 70-year-old head of the Union for the Republic and Democracy (URD) party, went missing on March 25 in the Timbuktu region of central Mali, in an area where Al-Qaeda-affiliated jihadists are rampant.

He was campaigning in his home area of Niafounke ahead of long-delayed legislative elections, whose first round took place four days later.

His disappearance, swiftly described by his party and the government as a kidnapping, shocked Mali, where abductions of senior politicians are rare in spite of the country's many other problems.

Mali has been struggling to contain an Islamist insurgency that erupted in the north in 2012, and which has claimed thousands of military and civilian lives.

Despite the presence of thousands of French and UN troops, the conflict has engulfed the centre of the country, reviving bloody disputes among ethnic groups, and spread to neighbouring Burkina Faso and Niger.

A computer engineer by training who was educated in Senegal and France, Cisse is a veteran figure in Malian politics.

His career dates back to a role as presidential aide in the early 1990s, followed by seven years as finance minister under the country's then leader, Alpha Oumar Konare.

He contested elections in 2002 before taking the helm of the commission of the West African Economic and Monetary Union (UEMA), an eight-nation customs and currency union.

He bid again for the presidency in elections in 2013 and 2018 that were both overwhelmingly won by Ibrahim Boubacar Keita, who was overthrown in a military coup on Tuesday.

The ICRC's chief delegate in Mali, Klaus Spreyermann, said in the statement that the letters "only contained family information, and the ICRC is not taking part in negotiations for Mr. Cisse's release."

"As a neutral and independent humanitarian entity, when an agreement is found between the parties concerned, the ICRC is willing to facilitate a possible transfer of hostages," he said.