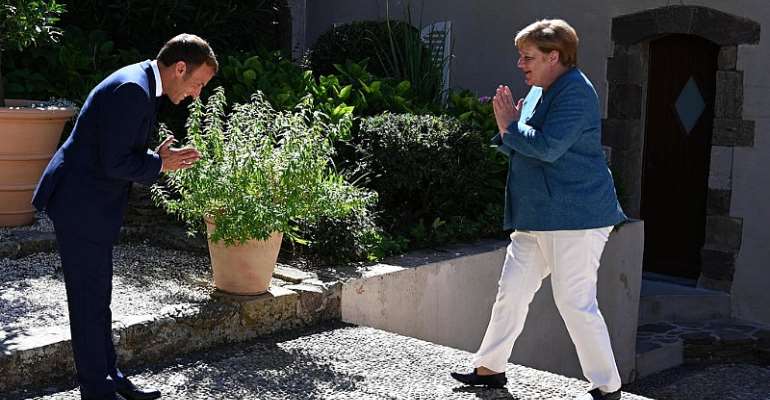 French President Emmanuel Macron and German Chancellor Angela Merkel emerged from talks to hail unity on a range of issues from the  post-election violence in Belarus to the treatment of the Russian opposition activist Alexei Navalny.

However the leaders, meeting at the French president's official summer holiday retreat at Fort de Bregancon, did diverge on an impending clash.

Macron expressed his support for the French side Paris Saint-Germain in the Champions League final in Lisbon on Sunday while Merkel offered her backing to PSG's German opponents Bayern Munich.

Common ground on Russia
As for the heft, Macron proposed an EU mediation in the Belarus' post-election crisis, while insisting that the solution lay in the hands of the Belarusian people.

He said that Russia, Belarus' strongest ally, should also be included in the dialogue, but warned Moscow against any aggressive intervention in its neighbour's internal affairs.

Both leaders also expressed their concern about Navalny, who was hospitalised in Omsk on Thursday with life-threatening symptoms .

Macron offered the 44-year-old protection and asylum facilities, while Germany sent an air ambulance to Russia on Friday morning.

Turkey, Brexit, Covid and football
The two leaders also discussed tensions between Greece and Turkey regarding the right to prospect for oil on the Mediterranean Sea.

They said that European sovereignty and stability was the common objective.

Macron supported the German initiative to mediate the affair, but warned that 'things should be re-clarified' in  case of 'provocations' and 'excesses' by Turkish President Recep Tayyep Erdogan.

As coronavirus cases rise in both countries, Merkel refused to ease sanitary restrictions in Germany, while Macron excluded a second nationwide lockdown in France.

"We're not going to bring the country to a halt," he said adding that people must learn to live with the virus while containing the spread of infections and protecting the elderly.