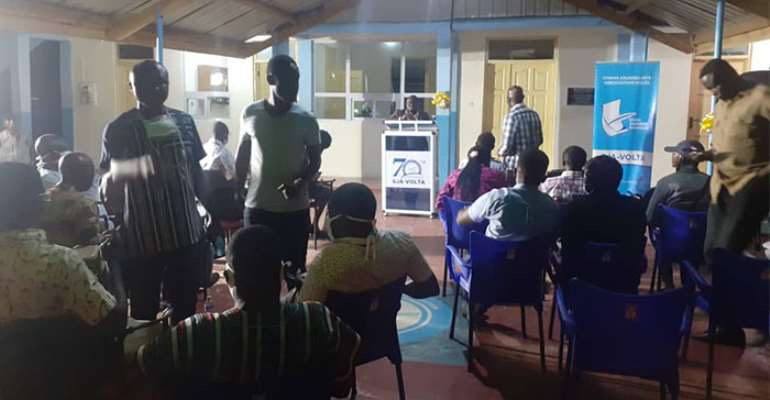 Members of the Ghana Journalists Association (GJA) and other key media personnel in the Volta region were sidelined on Wednesday evening after a scheduled meeting with the flagbearer of the National Democratic Congress (NDC), John Dramani Mahama was dishonoured.

The journalists got the news about the cancelled meeting after waiting for the former President (member of the GJA) and his entourage for about three hours.

The Chairman of the Volta Chapter of the GJA, Anthony Bells Kafui Kanyi who announced to the already distraught media described the incident as embarrassing and a disrespect to journalists in the region.

According to him, the Association received an official letter from the Volta Regional Office of the NDC indicating that the flagbearer will be touring the region from Monday, 17 to Thursday, 20, 2020.

As part of the itinerary of the former President, he will be interacting with the media in the region on Wednesday 19, 2020 at 7pm at the plush Volta Serene Hotel, Ho.

Same was communicated to selected journalists across the region who honoured the invitation.

However, journalists received the shock of their life when on reaching the Volta Serene Hotel, the manager informed them that none of their spaces had been booked for such a meeting.

After waiting for close to an hour, the journalists were informed to assemble at the Volta Regional Press Centre.

At the Press Centre the media personnel waited for another two hours only to be told a few minutes to 10pm that the meeting had been called off.

“This is very embarrassing. This is unacceptable. Executives will meet to decide the next line of action, meanwhile I cannot stop anyone from right to report on this incident,” the regional GJA Chairman, Anthony Bells Kafui Kanyi retorted.

Regional First Vice Chairman of the party, George Loh who led a delegation to apologise on behalf of the party and the former President noted that it was unfortunate for such a situation to arise.

Although the meeting was captured in the widely shared itinerary of the flagbearer, Mr. Loh, denied knowledge of the said meeting until about 3pm when they were on the road that Wednesday.

“We tried everything possible to salvage the programme. The programme was to be held, but unfortunately it could not be,” he noted.

According to him, “this is what happens when too many centres wanted to organise the same invent.”

He further doubted the flagbearer was aware of the meeting saying, “I doubt if our flagbearer is aware he is supposed to address the programme.”

This is because if he did, knowing that he is a media man, he would have honoured it. Particularly the day's tour closed earlier than previous days. Nonetheless, “We apologise profusely. There cannot be any explanation why we should keep you all this while,” Mr. Loh appealed.

He assured that efforts will be made to get the flagbearer or his vice presidential candidate to meet the media at another time.

This is not the first time the NDC is mistreating the media in the region. Prior to the 2016 elections journalists in the region were left to their fate after the vehicle which the party provided during Mr. Mahama's (then President) campaign trail broke down. Attempts to seek assistance proved futile.

In this current four-day campaign trail, journalists who were invited and assured of transportation and accommodation support are yet to be attended to; as the time of filing this report.