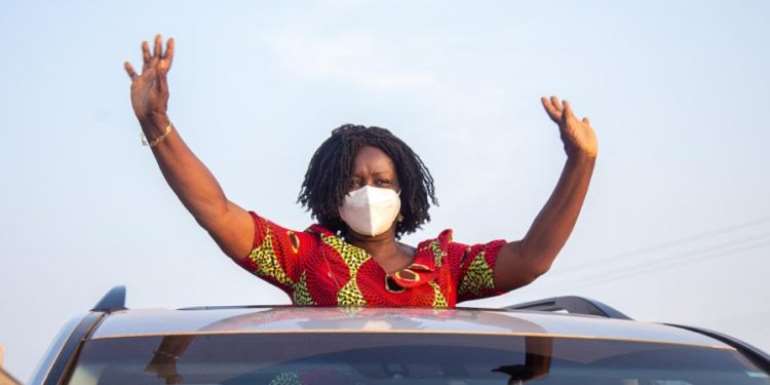 Her visit, after she was outdoored as running mate to the former President John Dramani Mahama, was to among other things, introduce herself to the chiefs and people of the region, and also solicit their support for the NDC in the upcoming general election.

She paid courtesy calls on the Yaa-Naa Abukari II, the Overlord of Dagbon, Mion-Lana Abdulai Mahamadu, the Chief of Mion, Yoo-Naa Abdulai Yakubu Andani, the Chief of Savelugu traditional area and Naa Feme Malba Nanyame Kofi, the Chief of Chereponi.

Other traditional leaders, she called on included; Naa Iddi Alhassan, the Chief of Zoggu, Naa Alhassan Andani, the Chief of Tampion, Mahama Sumani, the Regent of Karaga.

The rest are; the Gushe-Naa, Abdulai Shitobu, Chief of Gushegu traditional area, the Chief of Sang, Alhassan Abukari and the Regent of Wulensi, Salifu Osman Wumbei.

Professor Opoku-Agyemang expressed gratitude to the chiefs and people of the region for their warm reception and gave the assurance that “all infrastructural projects which were started by the previous NDC administration, but have been abandoned by the present government, would be completed when the NDC is voted into power”.

Speaking on education, she pledged the next NDC government would ensure increased access to quality learning, introduce more incentive packages for teachers, and restore discipline in schools.

“The next John Mahama-led NDC government will build a just and equal society for all Ghanaians, regardless of their ethnicity, religion and political ideology”, she noted.

She was accompanied by Mr Haruna Iddrisu, Minority Leader in Parliament and Member of Parliament (MP) for Tamale South, Alhaji Ibrahim Mobila, Northern Regional Chairman of the NDC, Mr Samuel Okudzeto Ablakwa, MP for North Tongu, Mr Alex Segbefia, a former Minister for Health and Deputy Campaign Manager of the NDC for the 2020 elections, Ms Emelia Arthur, a former Deputy Western Regional Minister, and Mrs Mawuena Trebarh, Spokesperson and Head of Communications for the running mate.