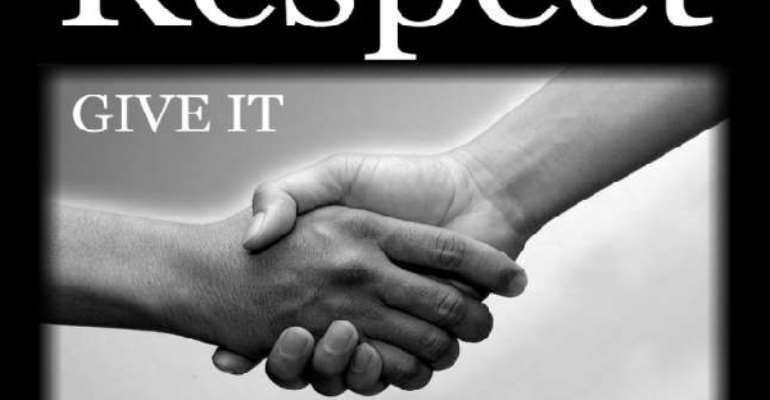 Before I proceed, I need to reiterate these facts as true:

The problem is not with the journey, but with certain attitudes we have been demonstrating—one that casts a shadow over the journey. It creates the impression that development is not something we would be methodically arriving at, but something that we, at our very best, might just stumble upon—again, not as a result of method, but of time. That with the prolongment of time, every nation—even the poorest now—may just find itself finally arriving at development. That no matter how slow they are running, they are eventually going to arrive at the finish line—last maybe, yet still arrive. This is not a narrative that any nation should wish upon itself.

Like in every journey there are hurdles. Ghana and Africa's hurdles are not found in an inherent incapacity but in our inability to effectively mine our resources—not just the natural, but significantly, our human resources.

Get off your high horse!—or in this case, your high camel

“Ghana is the best—natural resource-wise” has been hammered on us for so long that the realisation that developed nations have their own fair share of such and such resources is quite hard to swallow.

In a ranking of the world's top ten natural resource-rich countries (accounting for the total reserves and market value of the resources)—I am sorry—Ghana is nowhere to be found. I hate to be the one bursting bubbles so I am not going to mention this: neither is the entire fifty-four states comprising the African continent—except one. Interestingly one finds, looming broad, a large number of developed countries. We could choose to dismiss such lists as 'developed-world-centric', but there is something particularly telling about them.

Mention natural gas, you hear the name: Russia. The country, together with Iran, contributes up to 40% of the world's natural gas. Russia contributes more lumber to the global community than every other country, followed by Brazil and Canada (another developed country). In coal, you again find Russia placing second globally; in gold you find the country, placing third worldwide. In fact, in the mining industry, Russia features prominently with a vast array of commodities ranging from copper, aluminum, magnesium, etc. The country, greatest in land mass globally, is placed on some lists as the world's topnatural resource rich nation, in other lists you find it in the top five.

The US has coal in abundance—over 30% of the world's coal. The country has timber, too, going for it. The nation is neither short on natural gas, gold, oil, nor copper.

You find in the coal list too, dominating, another developed country, Australia, where coal is mined nationwide. Australia tops, too, the gold list—the country supplies over 14% of the world's gold. It supplies, too, almost 50% of the world's uranium. In other metals (copper, iron, aluminum, opal, rare earth metals, etc); in timber, et al, you find featuring prominently, Australia.

In rankings of the world's resource rich nations—better believe it—the developed world features predominantly. In top ten lists one is likely to find four or five developed countries—as opposed to Africa's one. One—just one. Dr. Congo.

Eye of a Needle

It is like when we Christians, in our moment of need, poverty, console ourselves with Matthew 19:24 “…it is easier for a camel to go through the eye of a needle than for a rich man to go into the kingdom of heaven;” or Muslims, with the Quran “…the gates of heaven shall not open to them, nor shall they enter paradise until the camel passes through the eye of the needle…” only to find that said rich man/woman is in fact a better believer than we are. A rude, rude awakening.

This all seem contrary to popular beliefs, or the beliefs inferred from our experiences—the historical slave trade, colonialism, the ongoing neocolonialism of the African continent—that the developed worlds are barren grounds, incessantly prancing about, poaching from here and there, especially from here—the African continent; poaching our natural resources, 'leaving us for poor', while they enrich their coffers—doing so solely with our resources.

This is true, the African continent has been—historically and presently—constantly pillaged by the developed world. However, this truth is only so in part, Africa is not the only resource rich land. We are blessed, abundantly blessed, but not exclusively so. What we have going for us, really is a vast land of untapped potential. 'Untapped' because we relegate our human resource capital to the backseat in this development bid of ours.

Perhaps, the real narrative ensuing is this: the developed world is a greedy bunch, or maybe an astute bunch. They are a people taking advantage of another people (Africans). They are a people who have mastered the art of 'utilisation'—of effectively utilising their very own human resources to effectively and efficiently transform their natural resources into globally competitive commodities. They are a people who have mastered the craft of pulling the rug from under yet another people's feet—Africans. Centuries prior, they had done so by stealing from us in broad daylight, now they do so at dusk. They are a people who have, by so doing successfully secured for themselves places of affluence and influence on the international plane. While we on the African continent, we Ghanaians are still singing about the richness of our lands, not of the potentials of our people.

The American child sitting in that classroom learning is socialised to believe him/herself to be the key tools (resources) and drivers of their nation and the world's advancement. The Ghanaian/African child is taught to sing praises to their rich lands, not their own rich hands. The former will change the world; the latter will just be an enabling ground for the former.

There is a Ghanaian and African problem needing remedy. One that does not necessarily change with the changing of votes and of governments—one that needs tackling from the very root.

Be careful all you kids walking around thinking your parents are wealthy; you kids wasting away, not fighting for a future of your own, awaiting your parent's demise so you might inherit enormous wealth, you will soon find that mama and dada are not as rich as you thought them to be. You will find that Ghana and Africa's natural resources mean nothing should her human resources not be mined.