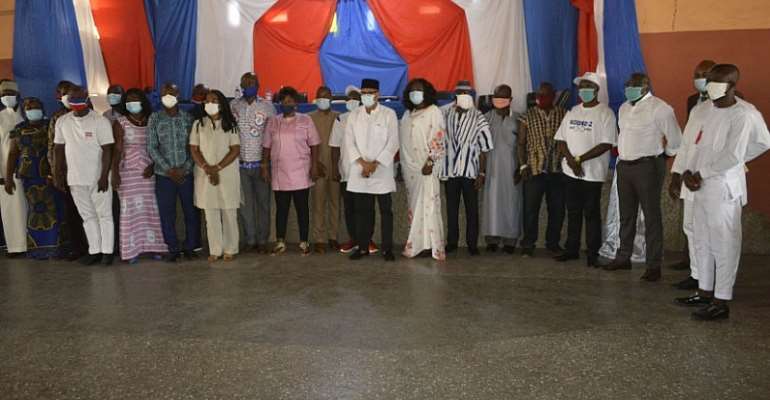 The ruling New Patriotic Party (NPP) has inaugurated a 34-member Upper East Regional campaign team in Bolgatanga, to spearhead activities of the party ahead of the December polls.

The role of the regional campaign team is to work tirelessly to make sure that the Party wins massively, for the Presidential candidate and claim all the 15 parliamentary seats in the region.

The NPP currently occupies three parliamentary seats in the region.

The Minister for Inner City and Zongo Development, Dr. Mustapha Abdul-Hamid who inaugurated the campaign team expressed worry, saying, “the kinds of developments that the New Patriotic Party has undertaken in the Upper East Region under President Kufuor and President Akufo-Addo does not reflect the kind of output the party gets when it comes to election”.

He said for the Region to get the needed development projects, the residents ought to change their voting pattern by voting massively for the NPP in the coming December general elections.

Mr Anthony Namoo, the Upper East Regional Chairman of the NPP, expressed optimism that with the development projects and programmes introduced by the government, the party shall win all the 15 parliamentary seats in the region in the coming elections.

He called for unity among the rank and file of the party.

Madam Tangoba Abayage, the Upper East Regional Minister and NPP Parliamentary Candidate for the Navrongo Central Constituency, mentioned the infrastructural projects being undertaken by the government, such as the Bolga-Bawku road, the Bolga-Naaga road, the Pwalugu Multipurpose Dam, street and traffic lighting system in the three Municipalities of the region and the rehabilitation of the Tono Irrigation Dam.