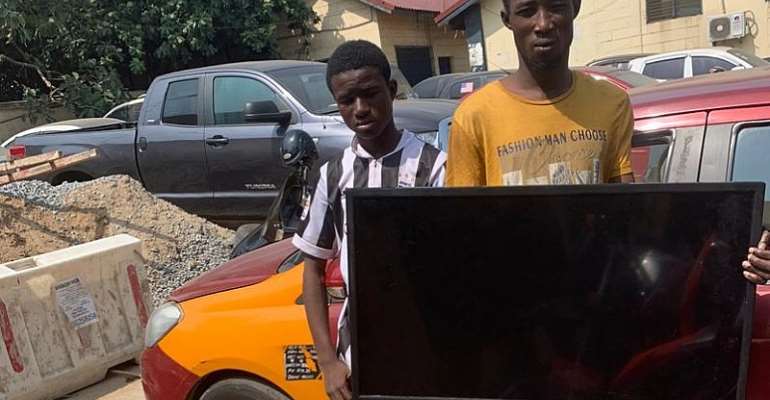 Three suspected criminals have been arrested by the Tesano Police for possession of two locally manufactured pistols and other items suspected to have been stolen during a robbery operation.

According to police, the suspects; Ato Kwamina, Issah Emmanuel, Ibrahim Abubakari were arrested on August 19, 2020, at Abeka Junction.

Speaking to the media, the PRO of Accra Regional Police Command, DSP Effia Tenge said the suspects are currently in custody and assisting investigations.

“Security details spotted the suspects in a commercial vehicle that was heading towards Circle,” she narrated.

They were considered as suspicious individuals by the police and “a search conducted on them led to the discovery of the offensive weapons to which they admitted ownership.”

The police also found six live cartridges and one laptop on them.

“All these items are suspected by the police to have been stolen during a night operation.”

“In due course, the police won’t hesitate in putting them before the law courts for any offence that they will be fingered for,” DSP Tenge said.

They were picked up at the Kokomba Market for offering a vehicle and other valuables they stole at a residence in Teiman for sale.

Preliminary investigations by the police revealed that the two suspects unlawfully broke into the residence and made away with some valuables including a saloon car, 43 Inch LG TV Set, an Infinix Mobile Phone and an amount of GHS 685.

On the same day, around 10 am, Police gathered intelligence that some two young men were offering a Voleex C30 saloon Taxi cab with registration number GN 2309-12, suspected to have been stolen, for sale at the Komkomba market.

According to the police, this led to their arrest and they have been processed for court.