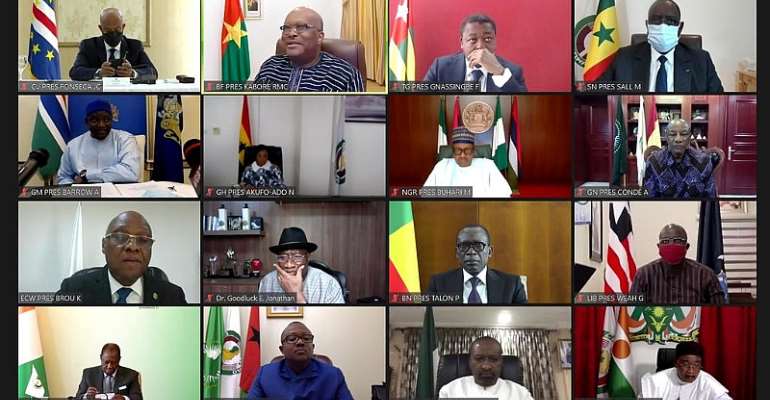 West African leaders on Thursday said they would dispatch envoys to Mali to restore "constitutional order" following a military coup that has been condemned abroad but celebrated at home.

"Mali is in a critical situation," warned Niger's President Mahamadou Issoufou at the end of a virtual summit on Thursday by leaders of the West African regional bloc Ecowas.

The acting president of Ecowas issued a statement saying the heads of state demanded that ousted President Ibrahim Boubacar Keita be returned to power and would “immediately” dispatch a high-level delegation to Bamako.

The delegation, to be led by former Nigerian President Goodluck Jonathan, has for mission to prevent Mali's collapse, which African heads of state fear could set a precedent in the region.

On Tuesday, rebel soldiers seized power, detaining the president, his Prime Minister Boubou Cisse and other officials in a fresh setback for a country battling chronic instability and a jihadist revolt.

Fears of repeat of 2012
Issoufou warned that unless the coup leaders were brought to heel, Mali risked being taken over again by terrorist and criminal organisations as was the case during its last coup in 2012.

President Keita's overthrow culminated weeks of protests in which Ecowas had tried to play a mediating role, albeit in vain.

The bloc proposed setting up a unity government that would include representatives of the protest movement, although it stood firmly by 75-year-old Keita. The package was bluntly rejected by the opposition.

Ecowas, made up of 15 members, including Mali, already suspended the country in response to Keita's overthrow, shutting off land and air borders to Bamako and halting financial flows.

Global condemnation
The regional bloc has also threatened sanctions against the coup leaders.

Ecowas joins the African Union, the European Union, United States and UN Security Council in condemning the putsch and demanding the release of the detained leaders.

France, which is leading a military campaign against jihadism in the Sahel, has voiced special concern.

"We have clearly condemned this coup d'etat against a democratically elected president," French leader Emmanuel Macron said Thursday on the sidelines of bilateral talks with Germany's Angela Merkel.

"We have called for power to be handed over to civilians and for a democratic transition to take place as quickly as possible," Macron said.

Jihad fight
Thousands of UN and French troops, along with soldiers from five Sahel countries, are currently deployed in Mali.

Calling itself the National Committee for the Salvation of the People, under the leadership of a colonel named Assimi Goita, the mutineers have vowed to stage elections within a "reasonable time" and respect "all past agreements," including international anti-jihadist missions.

They also urged citizens to return to normal life and warned against acts of vandalism after some buildings were torched.

Junta support
Bamako residents have expressed widespread support for the coup and the capital was calm for a second straight day on Thursday.

“This coup is a liberation... Organisations like Ecowas should support the people and not heads of state,” said Brema Soumare, a 35-year-old architect.

Meanwhile, the M5-RFP coalition of opposition groups that spearheaded protests against Keita before the coup has since embraced the mutineers and rejected Ecowas's position.

“If they want to come, they can come but we are not going to move,” Cheick Oumar Sissoko, a coalition leader, told reporters. “We are going to cross Ecowas's red line.”

Opposition leaders said they would hold a rally in Bamako on Friday to celebrate what they described as their “victory”.