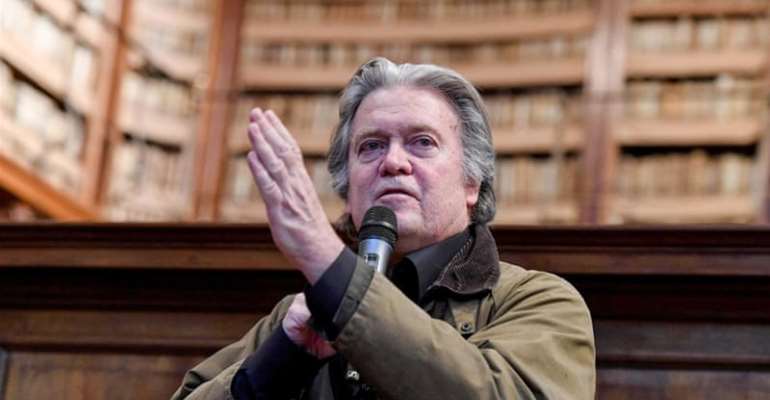 Former White House adviser Steve Bannon to Donald Trump was arrested on Thursday on charges that he and three others illicitly took money from donors in an online fundraising scheme “We Build The Wall”.

The charges were contained in an indictment (PDF) unsealed in Manhattan federal court.

Federal prosecutors alleged that Bannon and three others “orchestrated a scheme to defraud hundreds of thousands of donors” in connection with an online crowdfunding campaign that claims to have raised more than $25m to build a wall along the southern border of the United States.

As a top adviser to US President Donald Trump’s 2016 presidential campaign who later served as White House chief strategist, Bannon helped articulate the right-wing populism and fierce opposition to immigration that have helped define Trump’s three and a half years in office. Bannon left the White House in August 2017.

Bannon was arrested on Thursday morning along with Brian Kolfage, Andrew Badolato and Timothy Shea, according to a statement from the US Attorney’s office in the Southern District of New York.

Bannon had publicly called the We Build The Wall campaign a “volunteer organisation”.

Kolfage “repeatedly and falsely assured the public that he would “not take a penny in salary or compensation” and that “100% of the funds raised … will be used in the execution of our mission and purpose”, according to the indictment.

The four men allegedly received hundreds of thousands of dollars “which they each used in a manner inconsistent with the organisation’s public representations,” the indictment alleges.

Bannon received more than $1m from the scheme through a non-profit organisation he controls, and used it “to cover hundreds of thousands of dollars” in personal expenses, the indictment alleges. Kolfage “covertly took for his personal use more than $350,000 in funds”.

President Trump speaking to reporters at the White House on Thursday distanced himself from his former adviser.

“I feel very badly. I haven’t been dealing with him for a very long period of time,” Trump said. “I don’t like that project, I think it was a project being done for showboating reasons.”

Trump said thought it was “inappropriate” to finance the border wall with private funds.

The three are innocent until proven guilty, the US Attorney’s Office statement said, reiterating a founding principle of the US criminal justice system.

The We Build The Wall website claims 500,000 people have donated and $25m has been raised.

Donald Trump Jr called the organisation “private enterprise at its finest”, “faster, better, cheaper” and saying “what you guys are doing is pretty amazing,” in a testimonial on the group’s website.

Trump’s signature effort to build a wall along the US-Mexico border – a key 2016 campaign promise – has struggled amid court challenges, logistical hurdles and opposition from Democrats in Congress.

Trump repeatedly promised that Mexico would pay for the wall in 2016 campaign speeches.

The charges against Bannon are being handled by the same federal office that prosecuted Trump’s former personal lawyer, Michael Cohen, and is investigating his current lawyer, Rudolph Giuliani. The office’s top prosecutor, Geoffrey Berman, was abruptly removed by Attorney General William Barr earlier this year.

The charges were announced on the same day that Trump faced another legal setback, with a judge dismissing his lawsuit trying to shield his personal and corporate tax records from release.