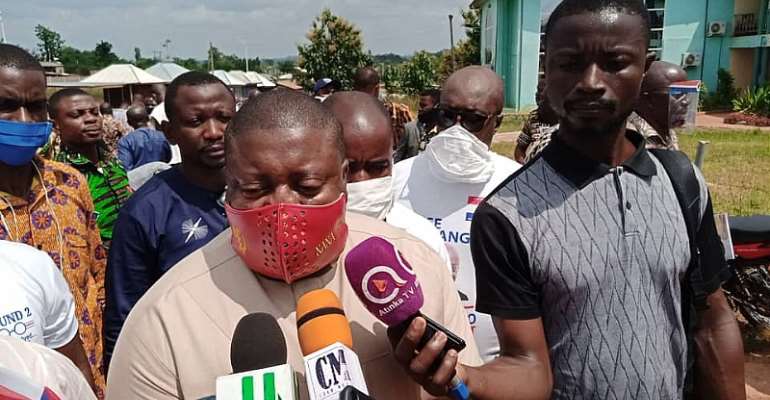 In the early hours of the day, the Ahafo Regional NPP launched its campaign team to face the December general elections. The New Patriotic Party Regional Executives in Ahafo, Constituency Executives and other proponents of the party were part of the launching.

The unflagging National Youth Organizer for the New Patriotic Party, Lawyer Henry Nana Boakye popularly known in the political ambience as Nana B stated emphatically that, their major opponent for the 2020 Elections, NDC has no good policy for the youth of this Country. He charged the youth to reminisce the kind of anxiety they went through during former President Mahama's regime.

Under NDC regime, Graduates unemployment skyrocketed under the eight years of NDC but the timely intervention of President Akufo-Addo led government the youth of Ghana have seen, feel, touch, and witnessed a massive improvement in their lives under NPP.

The implementation of Nations Builders Corps (NABCO) has really reduced the burden of the youth who were in a total pool of palpitation under NDC era.

The massive recruitment of the youth at the Local Government sector, recruitment of nurses and midwives who were neglected by former president Mahama is highly appreciated.

Nana B called on all the Youth in the Ahafo Region and Ghana in General to campaign vigorously to make the agenda four more for Nana a reality.

He motivated the youth to take the NPP 2020 campaign as their personal property and spread the good news of NPP to every tom, dick, and harry.

Lawyer Henry Nana Boakye used the opportunity as a voluminous conduit and advised the youth to desist from all forms of Political vituperation and vendetta.

He assured the media that, NPP shall campaign on issues, not insults because President Akufo-Addo has a lot of achievements to campaign about.

He assured the Ahafo Regional Minister, Hon. Evans Opoku Bobie (MP) and the entire campaign team of his readiness to support Ahafo to win all the six Parliamentary seats for NPP.