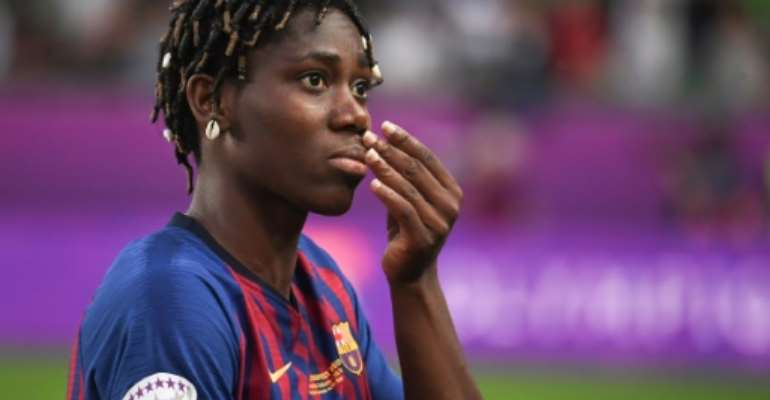 Barcelona striker Asisat Oshoala has become one of African football's biggest women stars even though her family tried to prevent her playing.

On Friday, the 25-year-old Nigerian will attempt to propel Barcelona toward a second straight Champions League final when they take on Atletico Madrid in a one-off quarter-final behind closed doors in Bilbao.

Last May, she came off the bench in Budapest with Barcelona already four down to Lyon and hit a last-minute consolation goal to become the first African woman to score in a European Cup final.

"I am proud to have scored Barca's first ever goal in a European final but was also sad about the result," she told the Barcelona web site in an interview published on August 16.

She was voted Africa's best woman player in 2019. The fourth time she has won the award.

Yet her family wanted Oshoala to give up before she had really started in Ikorodu, a poor and overpopulated neighbourhood on the outskirts of Lagos.

"My parents were against Asisat pursuing a career in a man's sport particularly because she's a girl and we are devout Muslims, but she refused to give up her dream," her older brother Abdulbasic told AFP, praising her "tenacity".

Oshoala told the club web site about the opposition.

"I must admit it caused a lot of arguments with my mother, but I got my way," she said.

Her parents were shopkeepers. She was one of seven children from her father's two wives.

"It's normal in my country," she said. "In a Muslim society a man can have more than one wife. I think it's quite natural because that's the way it has always been for me." 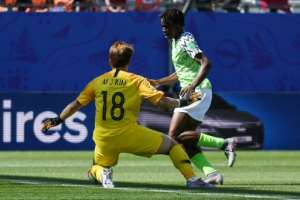 Asisat Oshoala scored as Nigeria beat South Korea for their only victory at the2019 Women's World Cup in France. By Jean-Pierre Clatot (AFP)

"Superzee", as she is known to team-mates, started playing at school and in the street before joining her first club, FC Robo Queens.

"What caught my eye was how fit and athletic she is. She will go on to be my top striker as we had a very good midfield to pass the ball to her to race to goal," club founder Emmanuel Osahon, who spotted her at a tournament in Lagos, told AFP.

"I am not surprised by how far she has since gone in her career because she's very disciplined, focused and ambitious."

She started as a defensive midfielder and was nicknamed 'Seedorf' after the former Dutch midfielder, Clarence Seedorf.

She played for Rivers Angels, Nigeria's leading women's football club but began to attract attention in Europe when she played as a striker at the 2014 women's Under-20 World Cup and finished as top scorer.

"I had other offers, but as I only speak English, I chose this option," she said.

After one injury-hit season on Merseyside, she moved to Arsenal and in 2017 accepted an offer from Dalian in China, before joining Barcelona at the start of 2019.

"It was a magical moment," said Oshoala who displays her appetite for change with her hair.

"If I see a colour I like, I dye my hair," she told the Barcelona web site. "It's orange at the moment, but next week it could be red, pink or yellow. Not for any special reason, simply because I like a change." 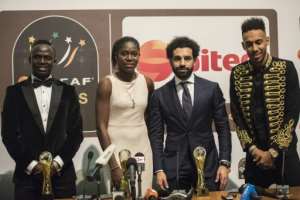 Asisat Oshoala was voted the women's African footballer of the year for a third time in 2017 and shared the stage with the top three in the men's category: winner Mohamed Salah, Sadio Mane and Pierre-Emerick Aubameyang. By CRISTINA ALDEHUELA (AFP/File)

She has set up the Asisat Oshoala Foundation in Lagos which works on a wide range of sporting, educational, social and medical initiatives for young women footballers, with financial support from her sponsor Nike.

"We only work with girls because boys have enough opportunities anyway," she said. "It is hard for girls in Africa to play football and other sports."

She has also helped her family, buying her mother a house in the old part of Lagos. Perhaps the arguments of the past have been forgotten.