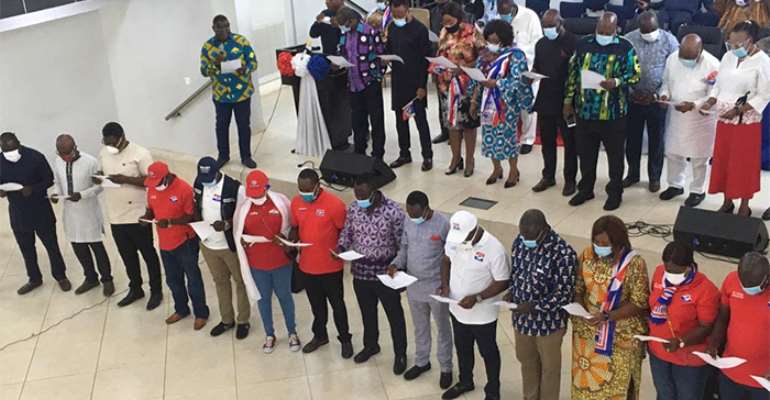 The Greater Accra Regional branch of the ruling New Patriotic Party (NPP) has inaugurated a campaign team to foresee the party's victory in the upcoming general elections.

The team which is made up of all the elected and appointed regional executives and deputies, Metropolitan, Municipal and District Chief Executives (MMDCEs) and others is to ensure that the 2020 campaign objectives of the party in the Greater Accra Region are met.

The committee is chaired by the Regional Chairman of the party, Divine Otoo Agorhom and assisted by other members of the party whose objective include coordinating the activities of the constituency campaign team.

The team is also expected to oversee the effective and efficient implementation of the 2020 campaign operations of the NPP in the region as well as raise the needed resources for campaign in the region.

Speaking at the inauguration ceremony, Greater Accra Regional Minister, Ishmael Ashitey re-emphasized the need for the party to secure massive votes in the region which will eventually lead to a victory for the party in the December polls.

He observed that any political party that won the most votes in the Greater Accra Region goes on to win the elections and therefore reminded the campaign team that they have a daunting task ahead of them now that the region recorded the highest number of registered voters.

He said “as soon as we deliver in the region, we have won the election. That is the message I receive wherever I go which means, the campaign team we inaugurated have a lot of work to do.

He tasked the team focus on the coastal areas of the region as they are one of the major sources of their victory in the region.

“I have noticed that anytime we win election along the coast, we win presidential elections. So we should concentrate most of our efforts along the coast. We have a campaign team that is going to guide us to do this work at the constituency level.”

Greater Accra Regional Chairman of the Party, Divine Otoo Agorhom urged members of the campaign team to unveil themselves for the specific jobs that will be assigned to them so that that party can win its target of 24 parliamentary seats in the region and 52% of votes in the Presidential election.

He touched on the 'unprecedented' achievements of President Nana Akufo-Addo and urged the campaign to build on that the deliver victory for the party.

Deputy National Campaign Manager of the Party, Lord Oblitey Comme reminded that party that the battle line is now drawn and called on all members of the party to come on board as the challenge now is to win the election and not for personal victories, stating that “it is only when we get it right that the rest will follow suit.”

Hottest Photo Reports
Catch up with all the political quotes from our politicians.
Advertise here
More NPP News
ModernGhana Links
Let’s support the lucky ones to 'break the eight' — COMAS President to rejected MMDCE aspirants
Afigya-Kwabre South NPP commends Akufo-Addo for retaining their choice as DCE
My support for NPP still unflinching — Collins Owusu Amankwah shows 'maturity' after losing KMA race to Sam Pyne
NPP’s Ashanti Regional Secretary, Sam Pyne nominated as Kumasi Mayor
NPP urge party members to be ready to accept Akufo-Addo’s new MMDCE appointments
Breaking 'the eight' is a must – Yaw Preko charges NPP footsoldiers
Be responsible and apologise for your 'do or die' comment – NPP Germany to Mahama
Mahama must apologize to women and children for 'do and die' comment — NPP-USA Women's Wing
NPP Europe Council of Elders mourn with Bawumia over lost of mother
TOP STORIES