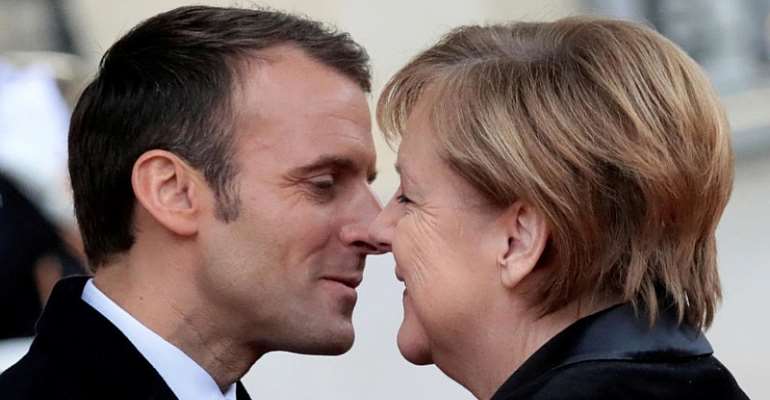 Perched on a tiny island off the coast of the Mediterranean, Merkel barely had time to appreciate the fort's stunning backdrop of blue seas and rocky coastlines before having to grapple with some of the hot topics that had taken her there.

From the Covid-19 pandemic to crises in Mali, Lebanon, Belarus, the east Mediterranean not to mention Brexit, the holiday atmosphere did not last long.

Working holiday
“The international agenda is particularly busy at the end of summer," the Élysée presidential palace said ahead of Merkel's visit.

Macron and Merkel were due to hold bilateral talks followed by a joint press conference and a working dinner as they looked to coordinate policy on the mass protests in Belarus following President Alexander Lukashenko's disputed re-election and the fallout from Mali's military coup.

The pair will look to push ahead with a €1.82 trillion Covid-19 recovery deal and budget for Europe secured at last month's EU summit, which was seen as evidence that the Paris-Berlin engine is driving Europe again.

The Franco-German rapprochement is also expected to come in handy in getting EU member states to agree on joint coronavirus measures and restrictions.

Both Macron and Merkel have said they want to avoid a mentality of "every man for himself".

Differences
The pair however do not see eye to eye on topics like Turkey, whose oil exploration of the eastern Mediterranean has put it at loggerheads with Greece and France.

Macron believes his Turkish counterpart, Recep Tayyip Erdogan, is leading an expansionist policy. Germany, for its part, is trying to mediate between Greece and Turkey, but has so far come a cropper.

"There are no deep divisions between Paris and Berlin," said the Elysée palace.

Bad environment
Talks were also slated to focus on climate change, as Germany, currently at the helm of the EU, wants to get the 27-member bloc ready to become the first continent to go climate-neutral by 2050.

Merkel is the third leader to pay an official visit to the 17th century château in Bormes-les-Mimosas. Russian President Vladimir Putin passed through in 2019 a year after the then-British prime minister Theresa May in 2018.