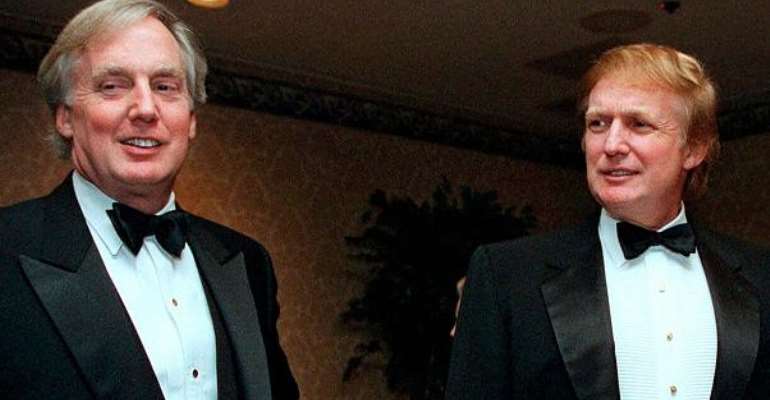 “He was not just my brother, he was my best friend. He will be greatly missed, but we will meet again” - President Donald Trump.

The above words were used by President Donald Trump to eulogise his brother Robert who just passed on in a New York hospital. He called Robert his brother and his best friend. He said that he will greatly miss him, though he believes they will meet again. At another time Donald said that Robert was a quieter and the easygoing one than himself and the only guy he ever called honey. Wow! The president visited him in the hospital the day before he died. Robert who passed on at the age of 71 was the last of the Trump siblings. Yes, true friendship and brotherhood are scarce in our world today so whenever and wherever you find it, please recognise and celebrate it. Many brothers are not friends and many friends do not keep the brotherhood when they are expected to do so. Though Donald and Robert had different personalities, they were able to manage their differences and had a good relationship. Donald is maverick, boisterous, flamboyant and loves limelight, but Robert was exactly the opposite: quiet, humble, loyal, soft-spoken and did not court publicity. Robert worked, campaigned, supported, respected, tolerated and loved his brother not minding their differences and weaknesses. Today, you can hardly find this chemistry in our families and relationships - people recognising their differences, yet manage them and respectfully, happily and lovingly work together to achieve mutual interests and goals.

Trump has just unconsciously revealed another interesting side of humanity in him. Though before now, he has been able to warm himself into the hearts of his admirers because of his love for his country, his dedication to the causes he believes in, respect for life and humanity and his extreme realism. He has been firm but considerate in pursuing American interests since assuming power. When the Iranians shot down that very expensive surveillance drone in the Persian Gulf, he said that he was not ready to kill hundreds of people or go to war because of an unmanned drone. So far he has resisted the temptation of deploying American military might to settle disputes; instead he prefers economic and diplomatic pressure. You also know that no other American president would have tolerated the current wasting of hundreds of thousands of American lives, social and economic loss in the name of a carelessly handled virus from another country. But Trump has so far kept his cool. When other countries were shying away, he ordered the US embassy to immediately relocate to Jerusalem insisting that it was overdue. And recently at the signing of restoration of relations between Israel and United Arab Emirate (UAE) he sued for peace and love, reminding the Arabs, Israelis and the three religions of Islam, Christianity and Judaism that they are related since they all came from one man- Abraham. The treaty was then rightly called Abraham Accord. Trump is doing everything he can to bring an enduring peace to the Middle East. Now back to relationships.

The problem with our relationships as brothers or friends is envy, intolerance, lack of love and respect for one another. Look at the story of Cain and Abel. They were brothers but Cain killed Abel just because of Envy. That was the first murder recorded after creation. What happened? Abel’s sacrifice was accepted and Cain’s rejected. And he lured Abel out and killed him. Jacob betrayed and tricked his brother Esau into selling his birthright to him. He refused to freely feed his hungry brother unless he agrees to relinquish his position and blessing in the family. Wickedness! Then, also look at Joseph and his step brothers. They envied and loathed him so much just because of his vision. Even when Joseph was bringing food for them, they said, “Let’s kill him and see what will come out all these his dreams.” But they forgot that you cannot kill a man of dreams. The unseen hand that gave him the dreams manipulated the situation and he was instead sold out - eventually into his destiny. These envy, betrayals, jealousy, strive, struggles between brothers, sisters, friends, neighbours are unfortunately still with us today. We have seen brothers, friends taking themselves to courts, fighting dirty, betraying, witch-hunting, backbiting, backstabbing and even poisoning themselves. Are you not seeing those who for decades have been fighting and killing themselves because of family inheritance? Come and I will show you many. There are relations who even carry their differences and fighting to the grave. It is wrong. We must learn from Donald Trump and his brother Robert. They were two strikingly different people, they had their misunderstandings and shortcomings, and yet they allowed brotherliness, friendship and mutual interests to prevail. They respected and loved themselves till death parted them.

Our relationship with one other should be like that of David and Jonathan, like Ruth and Naomi. Do you remember them? Jonathan loved and was so loyal to David that he was ready to stake his life and forgo his own right to the throne. Jonathan protected and helped David against his own family and personal interests. Imagine relinquishing his right to the throne just because he saw that the divine had chosen David? Can we find that kind of loyalty and friendship today? No way! Look at Naomi and Ruth. When everything looked so gloomy, helpless and hopeless, Ruth bluntly refused to abandon Naomi. She told the woman, “I will go where you go, your people shall be my people, your God my God and where you die I will also die.” Wow! Loyalty in the highest order! Today, people don’t even wait for that long to abandon you. Just a little trial or setback, all your relations and friends have evaporated. You will be left alone to lick your wounds and nurse your pains. They will wait to see if you will survive or not and if you eventually bounce back, they will shamelessly again want to creep in. So sad! We must learn to be loyal, true, forgiving, loving, dedicated and truthful to others, especially to our friends and relations even when they are not perfect. After all we all have our individual weaknesses. Nations and groups must understand that we all came from one source and so should see and deal with others as brothers and friends. We are one! We must all live in peace. Also like President Trump rightly said, there is a meeting again after this life. I love that. It is true. And if you have this hope you will be very careful of how you live on this side of eternity.

Rev. Gabriel Agbo is of the Assemblies of God and the author of the audiobooks: Never Again! Power of Midnight Prayer, Uncommon Success. Website www.authorsden.com/pastorgabrielnagbo Tel: 08037113283 E-mail: gabrielagboyahoo.com