Akuapim North Gets A Teacher As New MCE 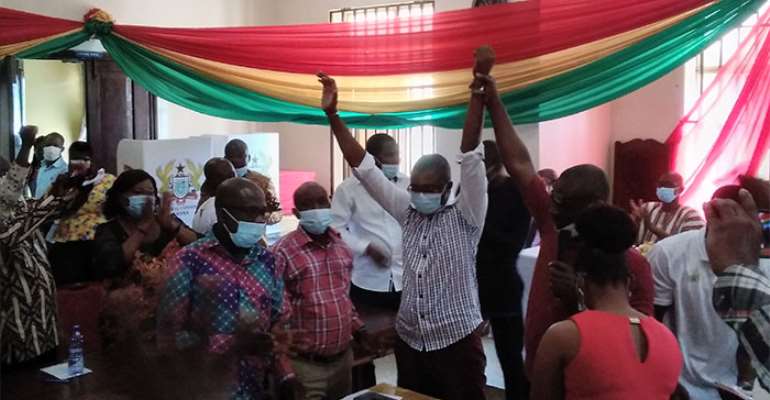 Barima Asiedu-Larbi, a teacher, has been confirmed as the new Municipal Chief Executive (MCE) of Akuapem North Municipal Assembly in the Eastern Region.

He has replaced the former MCE, Dennis Miracles Aboagye, who was relieved of his post two weeks ago.

He received 45 votes out of the 46 cast, representing 98% in an election held at Akropong and supervised by the Electoral Commission. Subsequently, he was sworn into office by the District Magistrate judge of the municipality.

Mr. Asiedu-Larbi thanked President Akufo-Addo and the assembly members for the opportunity to serve the people in the municipality and also pledged to work harder to bring development to the area.

He advised the assembly members to eschew bickering and instead work together for the people.

On six occasions, the assembly has failed to elect a presiding member (PM).

After the MCE confirmation, two members of the assembly — Nana Appianti, a government appointee who is the Constituency Organizer of NPP, and NADMO Director of the Municipality, a former PM, Asiedu Offei — showed up to contest the presiding membership position.

After counting the total votes of 46 members, Mr. Offei was elected as the PM of the assembly with 45 votes.

The Eastern Regional Minister, Eric Kwakye Darfour, in his speech, said the confirmation of the MCE would ensure rapid development of the municipality.

He urged the MCE to cooperate with the assembly members in the discharge of his duties.