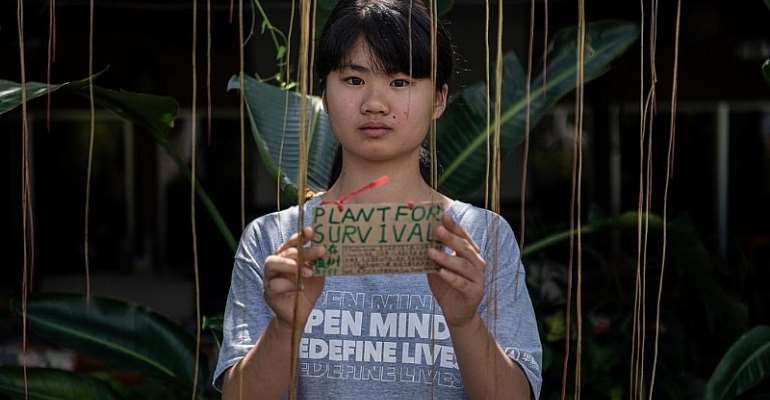 Howey Ou is a 17-year-old Chinese citizen, who joined the world youth movement 'Fridays for Future', walking in the footsteps of another young activist, Greta Thunberg. But she faces not only being expelled from school but threats to her family's safety and harassment on the web.

Howey is adamant that if she doesn't stand up and do something for the planet, she'll live to regret it.

She first drew attention to herself last year, when she began a solo protest in front of the town hall in the Chinese city of Guilin, holding up homemade banners, alerting passers-by to the dangers of climate change.

While Thunberg, who created the Fridays for Future youth climate movement went on to address the United Nations in 2019, Howey faces a darker challenge.

Over the summer, Howey was actively handing out information leaflets and planting trees to build awareness.

Her solitary acts have seen her expelled from school, which in turn may jeopardize her opportunity to sit for the final exams.

Police called her parents and told them to warn their daughter of the consequences of speaking out against China's stance on the environment.

"In 20 or 30 years, if I look back and realize that China hasn't taken a stand, I won't be able to accept it," she told RFI. She said her actions are not meant to be unpatriotic.

"My national pride is to accept my part of responsibility," she explained.

Her family went to great lengths to persuade her to give up her cause, for her personal safety, namely because those who challenge the communist party line often find themselves in jail, or worse.

Too much at stake
Her parents confiscated her electronic devices, shut her up in her room and argued with her for hours. But to no avail.

"How will she get a job without her leaving certificate ?" asks her worried father.

Howey responds by saying that everyone's future is at stake if people don't come together to save the environment.

"We will all feel guilty for the next generation if we don't do something," she said.

"The climate emergency is the worst threat that humanity has ever faced. We're in a boat that is sinking but people continue to eat and drink happily as if nothing was happening," she told AFP.

She has been mocked on social media as an "attention seeking lounge-room," activist, and criticised for giving an interview to the German press, all of which she says she is ignoring.

"It's time to set aside our differences. We need unprecedented solidarity between nations ... this battle needs to be inclusive," she told RFI.

"I will feel ashamed if China doesn't stand out and say something in this period."