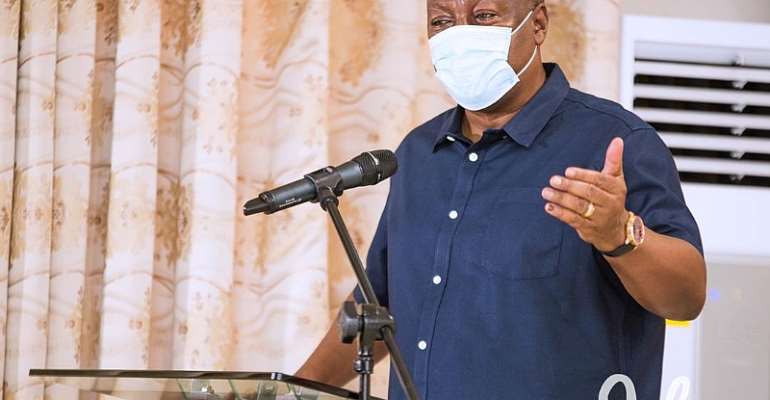 Former President John Dramani Mahama has described the upcoming elections as a critical event that would help shape the nation's destiny.

He said the December general elections would shape the future of the young generations and that was the reason he was seeking power back.

The NDC flagbearer therefore asked all eligible voters to take part in the exercise.

Mr Mahama made these statements, when he paid a courtesy call on Togbe Afede XIV, the Agbogbomefia of Asogli State in Ho on Wednesday, August 19, 2020, as part of his campaign tour of the region.

He said the economy under the current administration was at the lowest ever recorded in the Fourth Republic, noting that “it was already struggling before the coronavirus” came in.

The former President accused the New Patriotic Party (NPP) of “political short-sightedness and victimisation,” and said, “this government takes decisions aimed at penalising political opponents but end up affecting the growth and prosperity of the Ghanaian”.

He accused the NPP of threatening national unity, and asked that the NDC, which believes in the policy of inclusion and equal opportunity for all, must be given back the leadership of the country.

Mr Mahama said NPP was a government of “consumption” whereas the NDC under his leadership had numerous infrastructure projects, which was evident in its spending.

“This election is to rescue the future of our young people, and it is the reason I am running again. We have an appointment with destiny on December 7. Don't make a mistake. We know that God will not fail us.”

Mr Mahama promised to mobilise resources and complete the hundreds of NDC government projects he claimed the NPP had abandoned, all within the first year of his next administration.

He touted his “big push” for infrastructure and apprenticeship packages for the youth as a comeback agenda.

Togbe Afede who is also the President of the National House of Chiefs commended the flagbearer for providing hope for the youth.

He said the nation had all in place for improvement and called for development planning devoid of politicisation.

Togbe Afede said “inclusiveness in planning and executing development projects was a development priority” and asked leaders not to be “consumed by their privileges.”

He condemned tribalism and bemoaned its persistence in the political landscape and advised that the nation fell on truth and unity to excel in peace and prosperity.