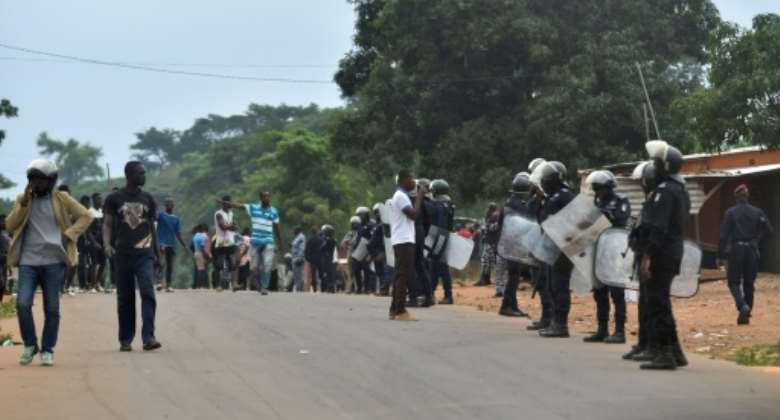 Police in Daoukro set up a buffer zone after clashes between ethnic groups sparked by President Alassane Ouattara's decision to run again. By SIA KAMBOU (AFP)

Ivory Coast has banned all outdoor protests until September 15, according to a statement Thursday issued after deadly clashes ahead of presidential elections in October.

The cabinet late Wednesday "decided to suspend protests in public areas, authorising them only in enclosed spaces... until September 15," the government said in a statement.

The measure "draws the consequences of the impact, in human and property terms, from previous demonstrations and the risk that pockets of inter-community conflicts could open up," it said.

On August 13, angry protests erupted in the economic hub Abidjan, and demonstrations in the central town of Daoukro turned to bloody ethnic clashes, after President Alassane Ouattara announced he would bid for a third term.

Critics of Ouattara say the 78-year-old is only able to run again on October 31 thanks to a 2016 change to the constitution that bypasses the country's two-term limits.

Three days of violence led to six deaths and about 100 injuries, according to an official toll published on Wednesday.

Additionally, 1,500 people fled their homes, 69 people were arrested and "numerous acts of property damage" were recorded.

More than 3,000 lives were lost in a months-long conflict which divided the country along north-south lines.

In March this year, Outtara signalled that he would bow out of politics and pass the baton to his respected prime minister, Amadou Gon Coulibaly.

But that scenario dramatically changed when Coulibaly died of a heart attack on July 8.

With no other appropriate successor in sight, Ouattara announced on August 8 that he would run for a third term after all.

Daoukro is a stronghold of former president Henri Konan Bedie, who is standing again at the age of 86.

The protests there lurched into a battle along ethnic lines after a local man was shot dead, an AFP reporter found this week.

The man was a member of the Baoule ethnic group which largely supports Bedie, himself a Baoule, and the finger of blame was pointed at local members of the Malinke people, deemed to support Ouattara.

Mankessim: 55-year-old kenkey seller knocked down by speedin...
49 minutes ago