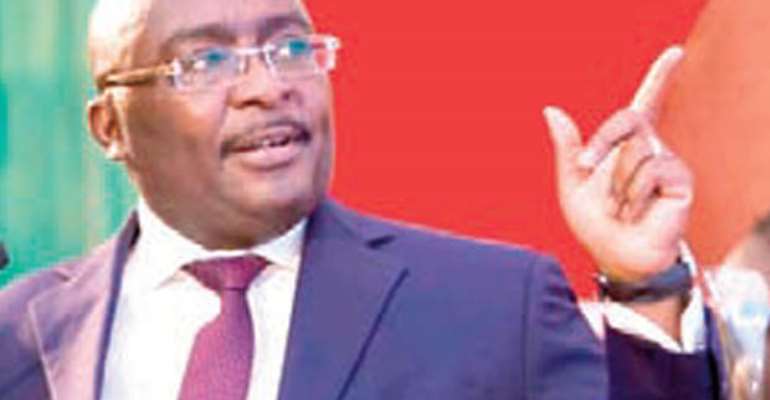 The Vice-President, Dr. Mahamudu Bawumia, on Tuesday listed government's infrastructural projects within the past three and half years and threw an open challenge to the opposition National Democratic Congress (NDC) and its flagbearer, ex-President John Dramani Mahama, to show Ghanaians what they accomplished by way of infrastructure initiative in their first term at the helm.

According to him, the New Patriotic Party (NPP) administration, under the leadership of President Akufo-Addo, has steadily ensured that every constituency or district benefits from some infrastructural projects under government's core policy to leave no district or constituency behind.

Dr. Bawumia said government had completed 1,307 projects under road infrastructure, with 620 still ongoing at the various parts of the country, totalling 1,927 projects.

He disclosed that a total of 79 steel and concrete bridges were being constructed at critical need areas in the country, with 46 of them completed.

He stated that to accomplish the infrastructure-for-all strategy, government had implemented several policy initiatives.

In the area of safety and security, he asserted that the NPP government had completed 103 projects, with 77 ongoing,

“These are all vehicles that we have put in place to ensure equitable distribution of infrastructure,” he noted while addressing the 8th Town Hall Meeting and Results Fair in Accra.

He said, historically, the provision of infrastructure had been concentrated in the big cities to the exclusion of the deprived and rural communities that lack basic infrastructure.

“To ensure equitable and inclusive growth, the provision of infrastructure amenities or facilities should not be dictated narrowly by our politics,” he noted and added that every community, district and region deserves expansion opportunities for growth and improvement in the standard of living of its residents.

“It should not be for the government or politicians to decide on the sharing of infrastructure amenities on the basis of tribal, ideological and political preferences,” Dr. Bawumia argued.

“Our opponents are welcome to show us what they accomplished by way of infrastructure initiative in their first term of office.

“They should bring the data and we will interrogate. This is because virtually all the key projects that they point to were completed in their second term,” he pointed out.

The Vice-President said, however, that the Akufo-Addo administration was happy to compare its three-and-half-year record with the NDC's eight-year record in the area of infrastructure.

“In many communities across the country, the data will show that the infrastructure we have provided in many districts over just three and half years surpasses what they provided in eight years in those districts,” he indicated.

“What is most important and interesting to note is that we have done all these while spending less on infrastructure as a percentage of our GDP. We have done more by spending less and that means we have more value for money. That is what it is,” he posited.

Former President John Dramani Mahama, who is staging a comeback after his heavy defeat in 2016, has been going round and accusing the NPP government of abandoning projects it inherited from his erstwhile administration.

However, Dr. Bawumia said contrary to the propaganda of the NDC, there is evidence that the NPP government had also completed and was working to complete many projects that it inherited.

He noted that the NPP government was not just building infrastructure as it had shown commitment to its social contract with Ghanaians of providing free Senior High School education, creating jobs, transforming agriculture, industrializing the economy, sustaining the National Health Insurance scheme, digitizing the economy, ensuring the safety of Ghanaians and keeping the lights on.

“We have also put in place a solid-based digital infrastructure to propel the digital economy of Ghana,” he asserted and continued that “the future is bright if we stay the course. That is why we are asking the good people of Ghana to give Nana Addo Dankwa Akufo-Addo and the NPP four more to do more for you,” he concluded.