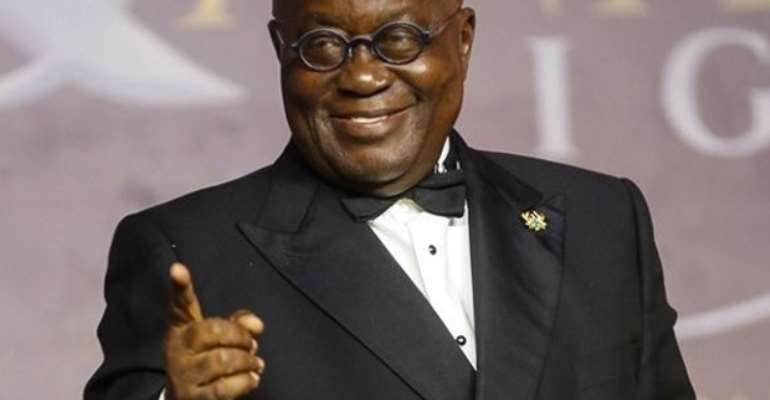 President Akufo-Addo has said the New Patriotic Party (NPP) administration is constructing real roads across the country and not those that are only found in 'green books', an apparent jab at the opposition National Democratic Congress (NDC) that prepared a document full of artistic impressions, claiming the projects were done in 2016.

“We are doing genuine roads on the grounds for all to see. They are 'fiili fiili' roads,” the President fired at Teleku-Bokazu in the Ellembelle District of the Western Region where he is touring.

“I told Ghanaians that this year will be a 'Year of Roads'. Ghanaians can see that I was not mincing words when I said that. These roads that we are doing are not 'Green Book' roads. We are not doing 'Green Book' propaganda roads,” he added.

President Akufo-Addo at a ceremony to cut the sod for the construction of many roads totalling over 200 kilometres (km) in the area gave an assurance that the projects his government was building across the length and breadth of the country would be ones that the citizenry themselves would bear witness to.

He stressed “Ghanaians should have faith in me that I will not lie, but will do all that I've said I will do for this country.”

The President later appeared on Takoradi-based Skyy Power FM and dared the NDC and its flagbearer, John Mahama, to come out with one policy they would implement to improve the people's living standards.

“The NDC and its flagbearer have not been able to come out with a clear message or a policy they would implement geared towards the people's development,” he said, adding “Aside from that, it takes the NDC and its leader too long to make decisions.”

He mentioned that this year's general election would be about 'track records' since the two main candidates have tasted the Presidency and, therefore, would have to account for their respective stewardships. Besides, he said the elections would be peaceful.

“We are in government and we have been busy but we will launch our manifesto on Saturday. They are in opposition but they have not been able to launch their manifesto,” the President fired.

He told his listeners that his government was embarking on massive road infrastructural projects in the Western Region and all other regions in the country, adding “we have planned an extensive road development programme for the region. Nearly 1,260 kilometres of road is being added to the existing road network in the region.”

He noted that the Western Region produced the chunk of the country’s wealth and so deserved to be developed.

He mentioned that as part of the road projects, the first ever interchange would be constructed at the PTC roundabout in Takoradi by the NPP government.

He said under his government, the Shama District in the region would benefit from the nationwide District Hospital programme.

He indicated that the government would be consolidating all its gains and policies and even do more, adding “so I need four more to do more.”

From the studious of Skyy Power FM, the President and his entourage moved to Shama to cut the sod for the construction of a 32 million Euro District Hospital.