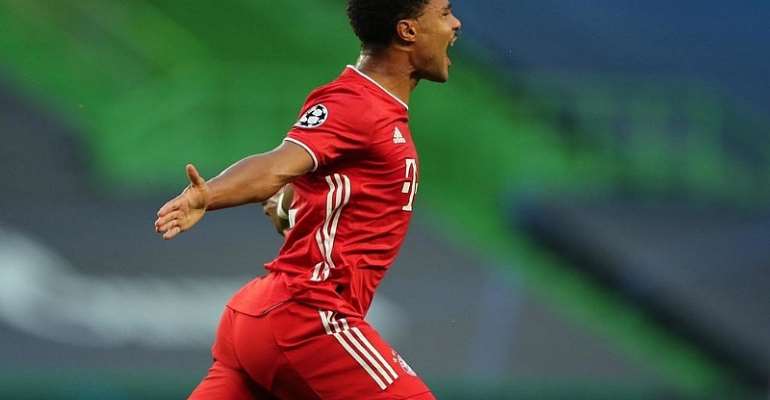 The Germans were under the cosh for the first 15 minutes of the encounter at the Estadio Jose Alvalade in Lisbon.

After eluding the Bayern centre-backs, the Netherlands international scooted into the penalty area, rounded the Bayern goalkeeper Manuel Neuer but scuffed his shot the wrong side of the right hand post.

The same stick came to Neuer's rescue 13 minutes later after Karl Toko Ekambi was released down the right. Alphonso Davies blocked his initial shot but the 27-year-old Cameroon international took the rebound, cut inside but his shot struck the upright.

That was as good as it got for Rudi Garcia's men.

A minute later they were 1-0 down. Serge Gnabry picked up Joshua Kimmich's chipped pass on the right of the Lyon penalty area.

Gnabry's second came on the cusp of half-time. Ivan Perisic wriggled free down the left and squared for Robert Lewandowski.

The normally lethal Poland international managed to botch his tap-in but it rebounded against Lopes into Gnabry's path. He slotted in gleefully.

Cruise
Lyon had the chance to regain a foothold in the match 15 minutes after the pause but Ekambi failed to steer the ball past Neuer after being sent clear by Houssem Aouar.

The Germans suffered few scares afterwards and Lewandowski added the third in the 87th minute to seal the victory and set up a mouthwatering final against Paris Saint-Germain on 23 August at the Estadio da Luz.

"I am very proud of the team," said Lyon sporting director Juninho after the match. "We played against a great team. To do well against a side like that you need to take your chances. We didn't do that."

Bayern, European champions on five occasions, will be hunting their third trophy of the season after claiming the Bundesliga crown and the German Cup.

PSG, winners of Ligue 1, the French Cup and the League Cup, are seeking their fourth title of the campaign but their first European Cup.