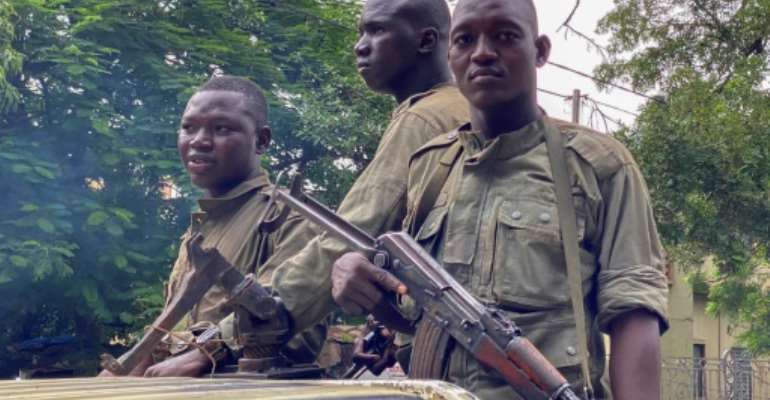 Mali's military junta has warned the population against "vandalism" in the wake of its Tuesday coup. By MALIK KONATE (AFP)

The United Nations Security Council on Wednesday joined a chorus of international voices pressing for a return to civilian rule in Mali after Tuesday's coup, as an army officer declared himself leader of the mutinying soldiers.

Troops should "return to their barracks without delay," the 15 members of the Security Council stressed, highlighting an "urgent need to restore rule of law and to move towards the return to constitutional order" after the overthrow of President Ibrahim Boubacar Keita following months of protests.

The African Union, European Union and the United States have all demanded the new-born junta free the 75-year-old president, Prime Minister Boubou Cisse and other leaders taken captive.

In the Malian capital Bamako, Colonel Assimi Goita said after meeting top civil servants that he was the leader of the "National Committee for the Salvation of the People" that has seized power.

"Mali is in a situation of socio-political crisis. There is no more room for mistakes," Goita said.

Coup chiefs meanwhile called on the public to return to normal life, warned against acts of "vandalism" and threatened to punish any soldier found guilty of extortion.

Colonel Assimi Goita unveiled himself as the leader of the coup. By MALIK KONATE (AFP)

But they made no reference to the detained leaders or their whereabouts.

The dramatic events in one of Africa's most volatile countries began early Tuesday, when rebel officers mutinied at a base near Bamako and headed into the city, where they detained Keita and Cisse.

There were few visible traces of those events on Bamako's streets on Wednesday -- troops had not been deployed en masse despite the coup leaders announcing a night-time curfew.

The 55-nation AU blasted the "unconstitutional change of government" in Mali.

The bloc announced that it was suspending Mali -- -- a rare move that bars a member from attending all summits and meetings -- "until restoration of constitutional order."

It also called for the release of Keita and other officials, a demand also made forcefully by Brussels and Washington.

US Secretary of State Mike Pompeo said the United States "strongly condemns the August 18 mutiny in Mali as we would condemn any forcible seizure of power."

"The freedom and safety of detained government officials and their families must be ensured," he said.

The 15-nation West African bloc ECOWAS, which had tried in vain to mediate in the long-running political crisis, also said it would suspend Mali from its internal decision-making bodies.

It pledged to close land and air borders to Mali and push for sanctions against "all the putschists and their partners and collaborators".

The coup leaders had appeared on television overnight to pledge a political transition and new elections within a "reasonable time".

In a brief media appearance, junta spokesman and Air Force deputy chief of staff Ismael Wague called on Malians to "resume their activities in a healthy manner."

Civil servants were "invited" to return to work on Thursday, he said.

He added that no people had died during the coup, despite unconfirmed reports of several deaths.

"The committee stresses that, during its operations, there were no deaths, contrary to certain allegations that talk of four dead and 10 injured," Wague said, repeating: "Zero deaths and zero injured."

With Mali the cornerstone of French-led efforts to roll back jihadists in the Sahel, President Emmanuel Macron reiterated Wednesday his call to return to civilian rule.

"The fight against terrorist groups and the defence of democracy and the rule of law are inseparable," he tweeted.

Macron added that for French forces "to leave is to provoke instability and to weaken our fight. It is not acceptable."

Tuesday's coup coincided with the scheduled resumption of daily protests. By STRINGER (AFP)

Wague said "all past agreements" would be respected, including Mali's support for anti-jihadist missions such as the UN force in Mali (MINUSMA), France's Barkhane force, the G5 Sahel, and European special-forces initiative Takuba.

The coup leaders also remain "committed to the Algiers process", a 2015 peace agreement between the Malian government and armed groups in the north of the country, he said.

The failure to roll back the jihadists was a major factor in fuelling frustrations with Keita's rule, say analysts.

Tensions flared in April after the government held long-delayed parliamentary elections, the results of which are still disputed.

A loose coalition of parties, grassroots groups and other organisations came together in the so-called June 5 Movement, united by the aim of getting Keita to resign.

But its campaign veered into crisis last month when 11 people were killed during three days of unrest sparked by a demonstration.

Tuesday's coup coincided with the scheduled resumption of daily protests, designed to culminate in a mass rally in Bamako on Friday.

Neither the movement nor its informal leader, imam Mahmoud Dicko, have so far reacted to the coup.