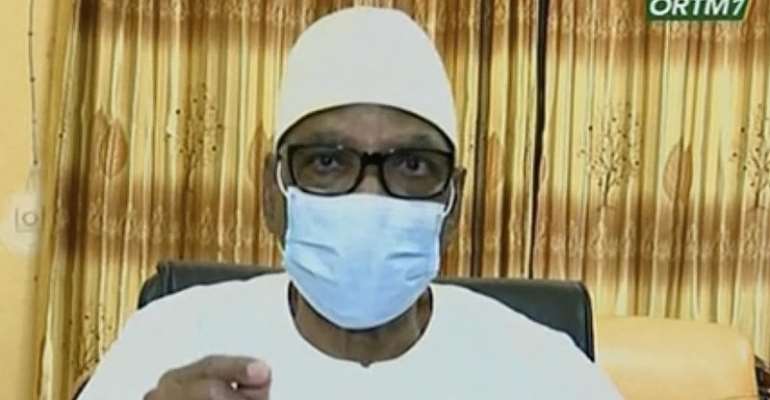 Leaders around the world have called for constitutional order to be restored in Mali after a military coup plunged the country into fresh political crisis amid fears that the president's fall could further destabilize the former French colony and west Africa's entire Sahel region.

International condemnation was swift and wide-ranging on Wednesday, hours after soldiers ousted Mali's president and government.

In his first official reaction since President Ibrahim Boubacar Keita was forced out, chairman of the African Union and South African president Cyril Ramaphosa condemned what he described the unconstitutional change of government.

Ramaphosa called for the immediate return to civilian rule and for the military to return to their barracks.

On Tuesday afternoon, rebel soldiers took Keita and his prime minister, Boubou Cissé into custody and drove the pair to the outskirts of the capital Bamako to the Kati military base - notorious as the venue for a mutiny in 2012 of mid-ranking officers.

African condemnation
Ramaphosa urged other leaders in Africa and beyond to denounce and reject the military-led government, which has pledged to oversee a transition to elections within a reasonable period.

Keita, who has been the target of months of protests over economic stagnation, corruption and a brutal Islamist insurgency, said Wednesday he was stepping down to avoid bloodshed.

Angolan leader, Joao Lourenço, tweeted: "We repudiate and discourage this way of forcing the alternation of power."

Similar sentiments were expressed in Algeria, which, like Mali, has also faced widespread anti-government protests.

The country's foreign ministry issued a statement. "The ballot box is the only means to power and legitimacy," it said.

EU lists priorities
In Europe, EU Council chief, Charles Michel, called for the immediate release of the prisoners and for a return to the state of law.

"We believe that the stability of the region and of Mali, and the fight against terrorism should be an absolute priority," he added.

The EU has operated a mission training the armed forces in Mali since 2013 and in July announced a joint EU special force to back Mali's fight against jihadist groups.

US wades in
The United States, which has threatened to pull its troops from the Sahel, joined in the chorus of condemnation, with US secretary of state Mike Pompeo condemning the forcible seizure of power.

Pompey said: "The US calls on all political and military actors to work towards a restoration of constitutional government, engage in dialogue and reject violence."

The resounding criticism is in stark contrast to the favourable treatment meted out to the mutinying soldiers by the Malian people.

Rebels were cheered by crowds who had gathered to demand Keita's resignation as they arrived in Bamako. There were no reports of casualties during the military takeover. Colonel-Major Ismael Wague, a spokesman for the coup leaders, has vowed to restore stability to Mali and form a transititional, civilian-government.

There were however reports of looting. Videos circulating on social media showed Malians running unchecked through luxury compounds in the city, including a property identified as belonging to the justice minister Kassoum Tapo, which was later burnt down.