African Rulers and Their Useless Rhetoric 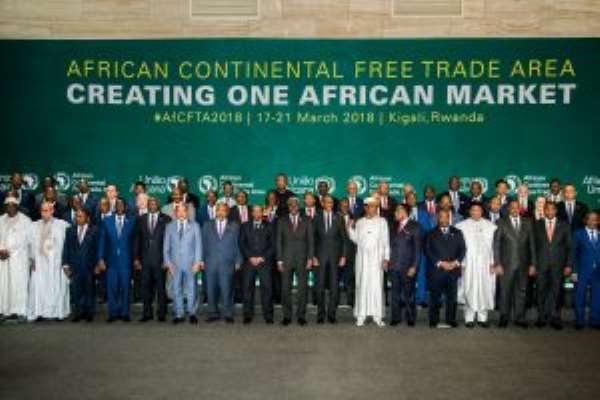 Two days ago, August 17, 2020, the president of Ghana, Nana Akufo-Addo, commissioned and handed over the secretariat that his government donated to house the African Continental Free Trade Area to the African Union (AU) Commission.

As usual, the president made lofty pronouncements. Listen to him: “...The pandemic has heightened the importance of the success of the AfCFTA. The disruption of global supply chains has reinforced the necessity for closer integration amongst us, so that we can boost our mutual self-sufficiency, strengthen our economies, and reduce our dependence on external sources,” he said...”

If only African misrulers will stop all the vapid TALK and start DOING the things they promise to do.

ECOWAS was established in 1975 to, among, other things, facilitate the movement of people and goods and boost trade among the member states. Forty-five later, citizens still endure a nightmare to transport themselves and their goods across the colonial borders that were created to create colonial garrisons that benefit European colonial powers.

While the Europeans who imposed these barriers to cripple us have removed all the barriers between their states, we continue to maintain them at a huge cost in terms of salaries and emoluments and whatnots to insanely corrupt customs and immigration officials but only in thwarting the efforts of our own people to freely trade among themselves the ways their forebears did before Europeans violently intruded into our space.

It baffles greatly that none of the media practitioners that listened to the Ghanaian President delivered his speech bothered to ask him the simple question of why he and his officials kept/keep silent as some xenophobic Ghanaians continue with their harassment of Nigerian traders in Ghana.

How did a leader sought and got the approval to set up AFCTA secretariat in his country and look unconcerned as some among his citizens continue to attack citizens of the largest economy on the continent?

Anyone who is not blind can see how Lebanese, Syrians, Chinese openly engage in retail trading in Ghanaian markets. Many of the shops at the High Streets and around the Post Office in Accra are owned by Asians and non-Africans. Why are the super-patriotic Ghanaians not harassing them but keep on venting their anger against Nigerians?

Anyone who has traveled around West Africa as I did will see the ease with which ordinary Africans relate and trade among themselves. All the Grand Marches that I visited in French colonies reflect the diversity and the unity of our people. There are markets in Agege in Lagos where Akan is the lingua franca; Ghanaians trade easily and openly without molestation.

It saddens greatly that WE remain our own worst enemies! It is also a great shame that WE appear incapable to learn any lesson from history.