Uganda's Besigye says he will not run in 2021 against Museveni 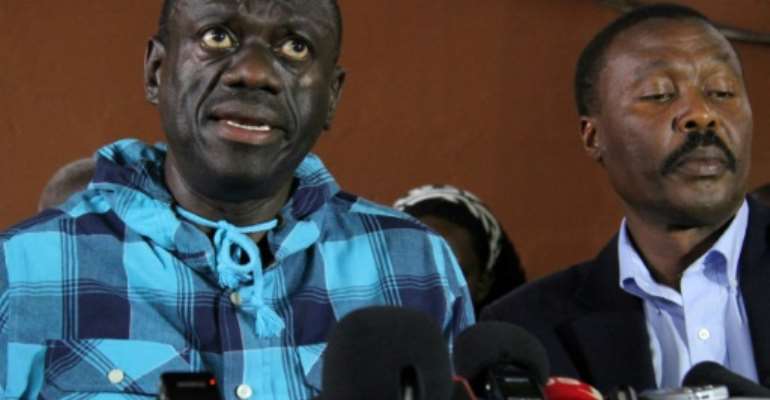 Opposition leader Kizza Besigye, left, speaking to the press after being bailed on treason charges in July 2016. By GAEL GRILHOT (AFP)

Four-time Ugandan presidential hopeful and veteran opposition leader Kizza Besigye announced Wednesday he would not run again in 2021 against long-term rival Yoweri Museveni, who has ruled since 1986.

Besigye, who waged a two-decade struggle against Uganda's strongman leader marked by arbitrary arrests and harassment, told supporters he would maintain a presence behind the scenes but was now passing the baton.

"I have taken a decision not to participate in the coming elections as a presidential candidate, but this does not mean I am giving up the struggle against dictatorship," the 64-year-old told AFP after the Forum for Democratic Change party nominated two other contenders.

"My focus, as agreed with colleagues, is to fight for our freedoms that Museveni has taken away from the people".

His departure from the race shifts the opposition spotlight squarely on Bobi Wine, a 38-year-old musician turned presidential aspirant who has cultivated a strong youth following, railing against Uganda's old political guard.

Wine, nicknamed the "Ghetto President" but whose real name is Robert Kyagulanyi, has rattled the ruling party and its patriarch Museveni, who had the constitution amended for a second time to allow him to run a sixth time in 2021.

The 75-year-old ruler is the only president most Ugandans have known -- the country's median age is less than 16.

But in his campaign to unseat Museveni -- who if successful again would be cemented one of Africa's longest-serving rulers -- the rapper MP has already faced the same tactics wielded so successfully against Besigye since he first ran for the presidency in 2001.

In previous elections, Besigye was routinely prevented by police from holding political rallies, and marches were frequently declared illegal and broken up by force.

He was arrested many times and detained on charges such as treason and inciting violence, which his party said were crafted to entangle him in the court system and keep him off the campaign trail.

Wine, too, has seen his concerts and rally appearances dispersed with live fire and tear gas.

This month, he said police opened fire on his supporters in the country's east, injuring several.

Museveni seized power at the head of a rebel army in 1986 and many observers say they doubt he will ever give up power through democratic elections.

There have been calls for the opposition to join forces as a united front against the Museveni or risk being weaker in divide.