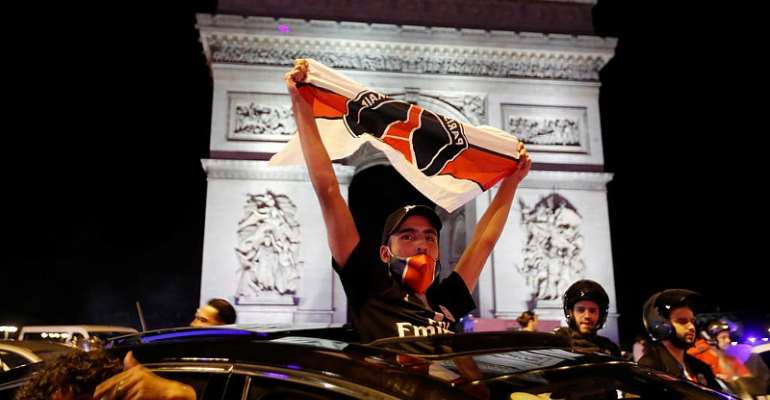 Thousands of football fans gathered along the Champs Elysées  to celebrate Paris Saint-Germain's progress to the Champions League final  despite restrictions on large public gatherings due to Covid-19.

Virtually no-one bothered to wear a mask at the spontaneous festivities during which security forces made 36 arrests for vandalism and violence.

Police used tear gas to break up groups of supporters brandishing large flags and letting off firecrackers who had come to celebrate PSG's 3-0 victory over Leipzig.

Scuffles and brawls broke out early on Wednesday as some supporters attacked a police van and threw missiles.

Witnesses said barricades were set up and some shops looted.

"As usual, the party on the Champs Elysées after the PSG victory was spoilt by thugs; police attacked, vehicles damaged, bins set on fire. This chronic violence comes down to state inaction," he wrote on Twitter.

Three minors among the 36 arrested
The Paris court on Wednesday said out of 36 people, 14 people were taken into custody for violence against members of authority. Three were detained for intention to participate in violence and the rest for aggravated theft or violence against other bystanders.

Masks are now compulsory in all public indoor spaces, and many outdoor spaces, especially in crowded tourist areas.

The Ile-de-France region, which includes Paris and its suburbs, is considered a 'red zone' for the risk of Covid-19, due to a spike in the number of infections in recent days.

Police said they did not hand out any 135 euro fines on Tuesday evening, saying they were focusing on prevention and warnings.

Celebrate in private
The French sports minister, Roxana Maracineanu, on Wednesday called for fans to avoid large gatherings in the street and to celebrate responsibly.

"They should celebrate their team's victory by staying at home or with close friends who they are sure are not contaminated," she told France Info.

Takoradi woman confesses she was not pregnant
52 minutes ago