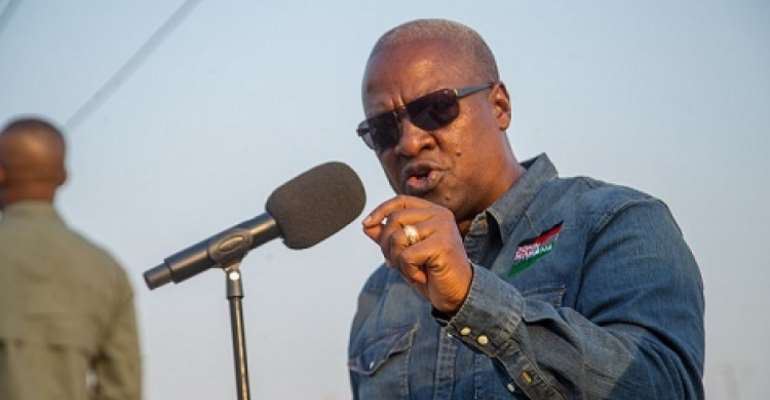 Former President John Dramani Mahama has questioned the basis of the agreement between government and a Special Purpose Vehicle (SPV) company known as Agyapa Royalties Limited.

The Government of Ghana through the Minerals Income Investment Fund set up a limited liability company in the UK as a special purpose vehicle to receive the money Ghana is supposed to earn from gold royalties and Ghana's equity in gold mining activities.

In exchange, the company will be raising between $500 million and $750 million lump sum for the Ghana Government on the Ghana and London Stock exchanges to invest in developmental projects.

The Agreement was passed despite a boycott by the Minority in Parliament.

Addressing Traditional leaders in the Ketu North Constituency as part of his four-day tour of the Volta Region, John Mahama said clarity is needed on the said agreement.

“Why will you be mortgaging this country's gold royalties, three months to an election to go and collect money to come and spend and so the Minority said we won't agree so they walked out of Parliament. But they went ahead and passed it. We don't even know those who are behind the company, and as a responsible government, why will you go and invest in an offshore tax haven when you know that is where fraudulent transactions take place?” Mahama asked.

Meanwhile, the Member of Parliament for Bia East, Richard Acheampong, suspects the Majority in Parliament passed the Agyapa Mineral Royalty Limited agreement to satisfy the interest of some members of the New Patriotic Party (NPP).

This was after Parliament gave its approval to the deal on Friday despite a walkout by the Minority who contended the deal does not serve the interest of Ghana.

Before staging the walkout, the Minority in a heated argument on the Floor of Parliament demanded that government discloses the owners of Agyapa Mineral Company.

“After the issue came to the public this government has now decided to change the name from Asaase to Agyapa,” MP for Ajumako Enyan Essiam, Cassiel Ato Forson said.

W/R: Adiembra residents save 17-year-old student from kidnap...
10 minutes ago