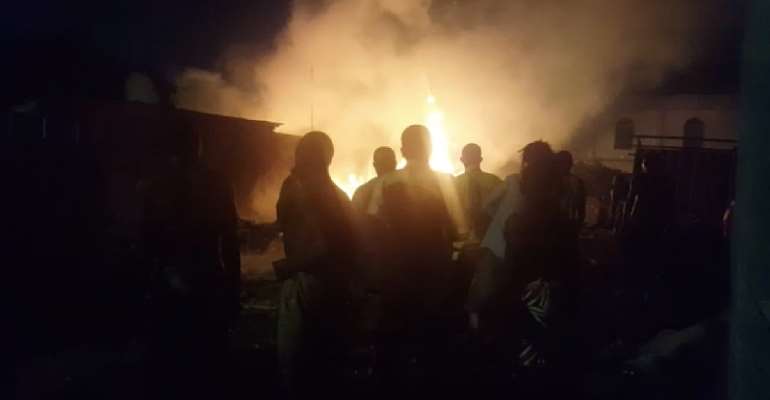 A fire outbreak at Town Council Line, a suburb at Laterbiokoshie in Accra has destroyed homes of squatters.

No casualties have been recorded so far.

According to an eyewitness, the fire which started on Wednesday around midnight is said to have been caused by the burning solid waste which later spread to and engulfed a nearby car.

A unit committee member of the area, Felix Djuba spoke to Citi News and recounted that: “This fire started around midnight. I was in the house when I heard my neighbours shouting fire.”

He also confirmed that residents who started a small fire lost control of the blaze.

“They said they were burning something small. As the started the fire, it started spreading around.”

According to him, it took the fire service about an hour to get to the scene after calls were made.

Nonetheless, he said, “they [the firemen] did a good job.”

This is the third major fire incident in Accra in the last week.

Parts of the Electoral Commission's (EC) Accra Regional office at Sapeiman near Amasaman caught fire. A room that contains electoral materials was affected.

More devastating, however, was the blaze that swept through a slum in Shiashie.

Over 100 kiosks which serve as shelter for some squatters were burnt to ashes.