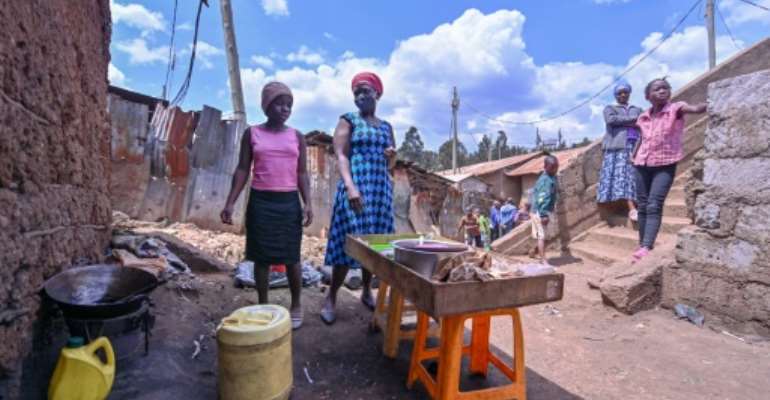 Teenager Bella Achieng works alongside her mother in Nairobi after the school year was cancelled in Kenya due to the coronavirus. By TONY KARUMBA (AFP)

Kenyan teenager Bella Achieng Otieno wants nothing more than to return to her classroom, growing anxious about her future with every passing day her school is closed because of coronavirus.

"I feel bad because 'corona' has destroyed everything, and we cannot go to school. I pray so that the corona thing should be finished," said the 15-year-old, who spends her time wandering the narrow laneways of Kibera, a slum in Nairobi.

Schools across Kenya closed as a precaution in March as the pandemic swept the globe. But in July, as cases soared in Kenya, the government announced classes would not resume until January, declaring the 2020 school year "lost".

The decision upended life for millions of keen students like Otieno, who will be forced to repeat a year when she eventually does return, and endure months of worry and boredom until then.

"It's really frustrating for the girls," said Rachel Esther, the deputy director of the Kibera School for Girls, which teaches 330 girls between five and 15, including Otieno, during the January-October school year.

"They rarely stay at home for so long. I'm sure most of them don't like it."

Cancelling school upended life for millions of keen students like Otieno, who will be forced to repeat a year when she returns. By TONY KARUMBA (AFP)

The school, a large red brick building founded by local NGO Shofco, tried to set homework via WhatsApp but struggled with so many students lacking smartphones or unable to afford data.

Even before abandoning the school year the government admitted in its emergency response plan that many parents with low literacy levels or who may not have a television or radio may struggle with homeschooling, and that this may deepen inequalities.

Esther fears idle students will fall so far behind they may not return.

And her young girls are also vulnerable in other ways. Experts have reported a rise in teenage pregnancies since Kenya's lockdown began, with more girls pushed into transactional sex to survive while others have more sex as they stay home from school.

Poorer families, already suffering under the hardship of a months-long economic shutdown, are suddenly needing to scrape together more to feed their children, something usually provided by schools.

"It's really frustrating for the girls," says Rachel Esther, the deputy director of the Kibera School for Girls. By TONY KARUMBA (AFP)

"It's not easy because I have to pay the rent (and) feed (my children)," says Otieno's mother Lilian Adhiembo, a widow who earns 200 shillings ($1.90) a day selling charcoal.

The pinch is also felt outside Kenya's cities.

Joseph Ochola Nzwa sold four bulls to pay for his children's education, a small fortune for the subsistence farmer in the western Kakamega region.

Even though the government has asked schools to refund fees or defer payments, Nzwa fears his investment is lost.

"I now fear my children may not finish their education," he said. The expectation that his older children would graduate, find work, and help pay for their siblings' tuition was also in tatters, he said.

Fears for next year

The shutdown has heaped enormous pressure on Kenya's private schools, which deprived of fees have struggled to keep staff and maintain their campuses.

Some 2.3 million primary school students attend private institutions in Kenya -- some funded by donors -- taking the load off public schools which are underfunded and overcrowded, particularly in disadvantaged areas.

The school tried to set homework via WhatsApp but many students lackedsmartphones or were unable to afford data. By TONY KARUMBA (AFP)

Some teachers in the private sector have not been paid for months and have sought out other work to survive.

As of early August more than 120 private schools had announced they would not reopen in January.

"There's a great possibility that if we do not get support from elsewhere, from the government, then very many other private schools might not be able to reopen. And this would throw our education system into jeopardy," said Ndoro.

Managing classroom size is already a huge challenge in Kenya, where sometimes 100 students cram into a single lesson.

But maintaining social distance -- often futile at the best of times in Kenya's crowded urban settings -- would be next to impossible if public schools receive an influx of new students come January, he said.

"Do these schools have space to create these extra classes? Do they have enough facilities for these classes? Will they employ more teachers?" said Esther, the school director.

"There's some kind of confusion around that. Unless it is made clear, I'm also worried that we might not be ready to open schools in Kenya by January."