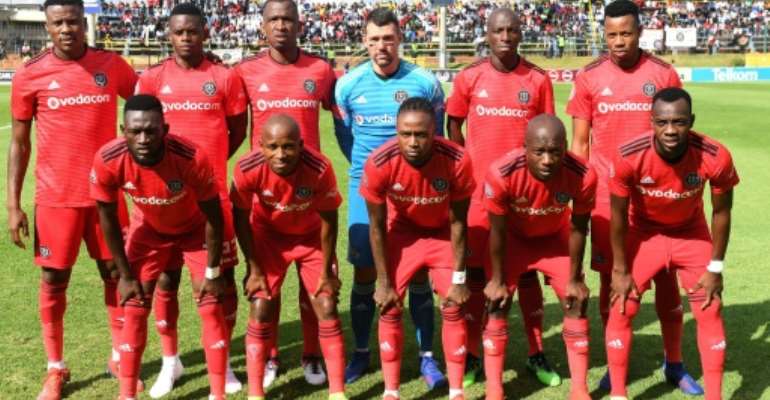 Orlando Pirates were held by Baroka Tuesday in the South African Premiership after conceding a goal that should have been ruled offside.. By STRINGER (AFP)

Relegation-threatened Baroka gained an unexpected South African Premiership point when they equalised from an offside position to draw 1-1 with Orlando Pirates on Tuesday.

Evidence Makgopa was clearly offside when he fired a cross from Thamsanqa Masiya past Wayne Sandilands on 35 minutes behind closed doors at a chilly Ellis Park in Johannesburg.

The assistant referee was behind play and did not notice that the Baroka forward was ahead of several Pirates defenders when the ball was crossed.

Masiya was also involved in the goal that gave Pirates a 16th-minute lead as his careless back pass was intercepted by Tshegofatso Mabasa, who scored from a tight angle.

Pirates introduced South African international Thembinkosi Lorch at half-time, but he had little impact on a match that looked likely to be drawn long before the final whistle.

Lorch had been banned from Pirates' last two league matches for breaking health protocol rules when the league resumed on August 11 after a five-month break due to the coronavirus.

Perennial strugglers Baroka also stayed where they were before the kick-off, in 13th position, but edged two points clear of the relegation zone.

Meanwhile, Gavin Hunt was unable to celebrate his 850th match as a top-flight coach in South Africa because his Bidvest Wits team could only draw 0-0 with Golden Arrows in Soweto.

The woodwork foiled both teams at Soccer City stadium with two Mxolisi Macuphu headers for Wits rebounding off the crossbar after Arrows' Michael Gumede struck the post.

After creditable draws with Chiefs and Pirates since the season restarted, fifth-place Wits were anticipating collecting maximum points against mid-table Arrows.

But the Johannesburg outfit were never able to assert their authority, leaving four-time Premiership-winning coach Hunt disappointed as he reached a personal milestone.

Chippa United remained 12th, two points above Baroka, after a 0-0 stalemate with seventh-place Highlands Park at Orlando Stadium in Soweto.

It was the first point for the new Chippa coach, Lesotho-born Lehlohonolo Seema, in his second outing after a poor performance when losing to Cape Town City last week.

On Wednesday, Chiefs will stretch their lead over second-place Mamelodi Sundowns to nine points if they defeat 11th-place Bloemfontein Celtic in Pretoria.

At the opposite end of the table, second-last Polokwane City face fourth-place SuperSport United in Johannesburg.