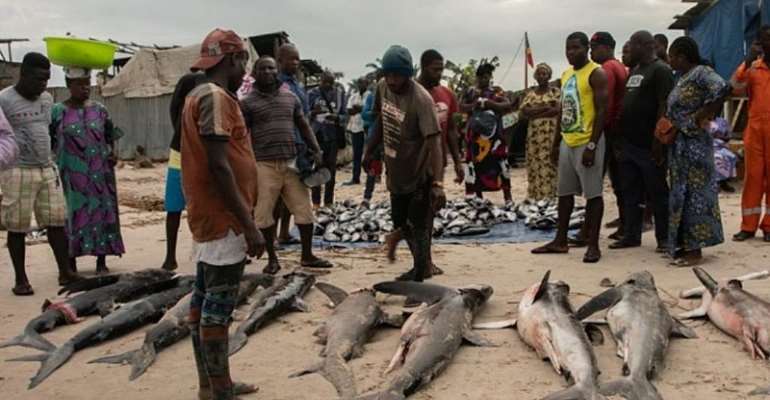 Overfishing in the Republic of Congo is threatening food security, the livelihoods of local fishermen and putting shark populations in danger, according to a new report published this week by TRAFFIC, a wildlife trade monitoring organisation.

“Local Congolese fishermen are actually at a loss,” Constant Momballa, a research officer for TRAFFIC's Reducing Trade Threats to Africa (ReTTA) project, told RFI. “They're the ones who are actually feeling the pinch of the shark trawlers.”

Shark fishing is driven by both the demand for shark fins, which are exported to Asia, and local consumption of processed shark meat. The industrial trawlers are Congolese-flagged vessels, but most originate from southeast Asia.

“Republic of Congo is one of the highest consumers of fish in central Africa, so 90% of the catch by the industrial trawlers is sold in the Congolese market,” said Momballa.

TRAFFIC's report, “Rapid Assessment of the Artisanal Shark Trade in the Republic of the Congo”, details an active fleet of more than 110 industrial fishing trawlers as well as 700 artisanal fishing boats for just 169 kilometres of coastline. This exceeds the national Exclusive Economic Zone's capacity estimated at just 30 industrial vessels, the non-governmental organisation's report says.

Sustenance and income for local people
Shark meat has become a vital part of people's diets in Congo Brazzaville, making them even more vulnerable to the health of shark populations, according to Momballa, the report's author.

Overcapacity and illegal fishing are also threatening some species of sharks, such as the Scalloped Hammerhead, that are assessed as “critically endangered” on the International Union for Conservation of Nature's Red List of Threatened Species.

The fins exported from Pointe-Noire, the country's commercial capital, are often from shark species listed in the Convention on International Trade in Endangered Species of Wild Fauna and Flora (CITES). However, the authorities hold no data on exports conforming to CITES regulations, despite other countries listing imports of dried shark fins from Congo Brazzaville.

Government policy in Brazzaville is focused on making sure there is enough fish for the Congolese people, and the authorities are benefitting from the fees they receive from quotas, said Momballa. But Congolese officials do not have “enough information to base policy on”, especially concerning quota sizes and the sustainability of fishing.

TRAFFIC is encouraging the government to try and step up their capacity to monitor, ensure sustainable levels of fishing and curb the activities of illegal trawlers. Momballa said the ReTTA project is also trying to work with government, helping it conform to CITES regulations and put in place a shark conservation management plan.

Illegal fishing in Gabon
In neighbouring Gabon, the ministry and fisheries and Sea Shepherd conservation group said this week that they had arrested two trawlers who had been illegally fishing prohibited ray species.

A routine inspection revealed over one metric ton of protected and endangered rays and ray fins, as well as five metric tons of rough-head sea catfish, which are also not allowed to be caught in Gabonese waters.

Sea Shepherd, a French non-governmental organisation, partnered with Gabon and since 2016 has been running joint patrols as part of "Operation Albacore".