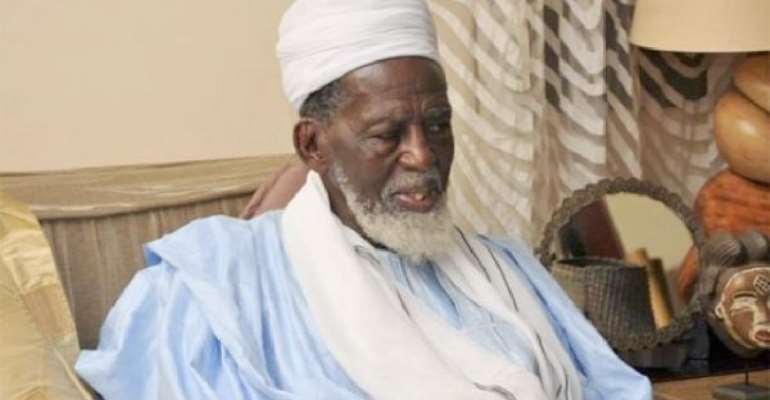 The National Chief Imam, Sheikh Osman Nuhu Sharubutu, has told an emotional story of how Government extended an extraordinary courtesy to him which enabled him travel to Senegal for the funeral of the son of his teacher and mentor.

Sheikh Ahmed Tijjanni Ibrahim Niass, who was Khalipha General of Faidatu-Tijjaniya Ibrahimiyya or world leader of Tijjaniya Ibrahimiyya, one of the biggest Islamic sects, died in Senegal earlier this month, and with Ghana’s borders closed to normal commercial flights due to the coronavirus, the National Chief Imam was caught in a quandary and appeared set to miss the burial and funeral rites of the revered cleric, who was also married to the Chief Imam’s daughter.

Speaking at Fadama on Sunday during a special prayer session organized for the renowned Senegalese cleric, Sheikh Sharubutu emotionally revealed how the government came to his aid to make the seemingly impossible trip possible.

Sheikh Sharubutu said upon Dr. Bawumia hearing the difficult situation he found himself in, the Vice-President reached out to President Akufo-Addo, who released a special flight for him to make the emergency trip to Senegal with his delegation.

The National Chief Imam said considering the crisis the nation faced and the absence of commercial flights due to the closure of the country’s boarders he was quite certain he would miss the funeral.

He expressed his delight and appreciation to Dr. Bawumia and President Akufo-Addo for not only making the trip possible but also for the diplomatic courtesies he received upon his arrival in Senegal, where he said a delegation led by Ghana’s Ambassador to Senegal met him at the airport in Dakar.

“What the President and the government did has really touched my heart,” Sheikh Sharubutu said on Sunday.

“I could have just expressed my appreciation to the government but this gesture has really touched my heart and I want to publicly acknowledge and express my gratitude,” Sheikh Sharubutu said.