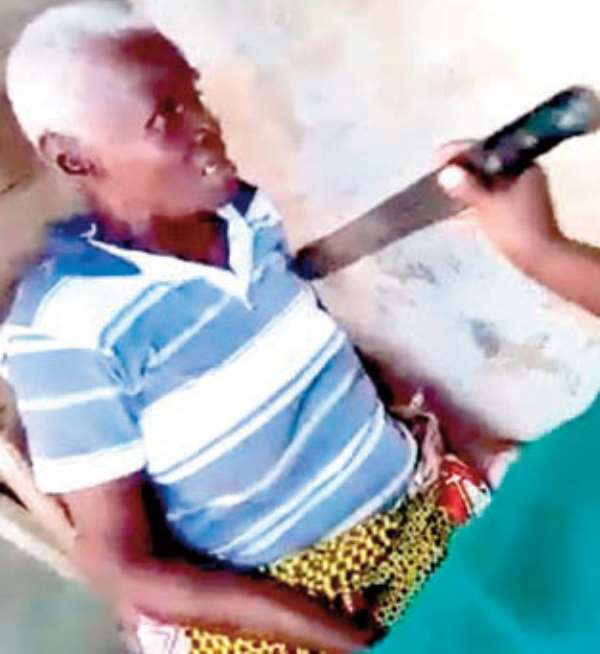 A video, which appears to show the final hours leading to the brutal lynching of the 90-year-old woman Akua Denteh for allegedly being a witch, has emerged.

The sad incident which occurred at Kafaba, near Salaga in the East Gonja Municipality of the Savannah Region, has since sparked national outrage leading to the arrest of some of the perpetrators.

In the video, the old woman, Akua Denteh, could be seen being threatened with what looks like a machete by some of the suspects who are currently in police custody.

It particularly appeared to show the supposed soothsayer, Sherina Mohamed, alias Hajia Filipina, the prime suspect in the case, torturing Akua Denteh with a machete to 'confess' that she was a witch.

At some point, Hajia Filipina placed the machete on her chest and even threatened to press it into her body if she did not confess.

After the machete threats, the supposed soothsayer is also seen whipping the old woman incessantly as she cried and appealed to her that she was not a witch.

Akua Denteh was then forced to drink what looked like a concoction from a bottle after which the remaining content was sprinkled on her head.

When the torturing became unbearable, the poor old woman had to 'confess' that she was a witch.

Residents could be seen in the video looking unconcerned while she was being tortured and others even joined in perpetrating the dastardly act.

Hajia Filipina was brought to Kafaba to 'exorcise' people of witchcraft and after some purported rituals, she reportedly labelled the 90-year-old woman as a witch.

There were also 17 old women the so-called spiritualist claimed were witches.

DAILY GUIDE understands that when Akua Denteh was informed, she denied being a witch and appealed to Hajia Filipina and her gang to spare her, but her plea fell on deaf ears.

Reports say the woman was openly beaten to death by a mob led by Hajia Filipina.

Sherina Mohamed alias Hajia Filipina, 40; Latifah Bumaye, 25, a trader, believed to be an associate of the ringleader, Hajia Filipina; and five others had been arrested and put before the Bole District Magistrate Court.

The five others are Haruna Aness, 34; Issahaka Tanko, 35; Shaibu Murtala, 29; Sulemana Ali, 35; and Issahaka Sachebu, 32 – all charged with conspiracy and murder.

They have all pleaded not guilty and the court, presided over by Andrew Prince Cudjoe, remanded them until August 20.