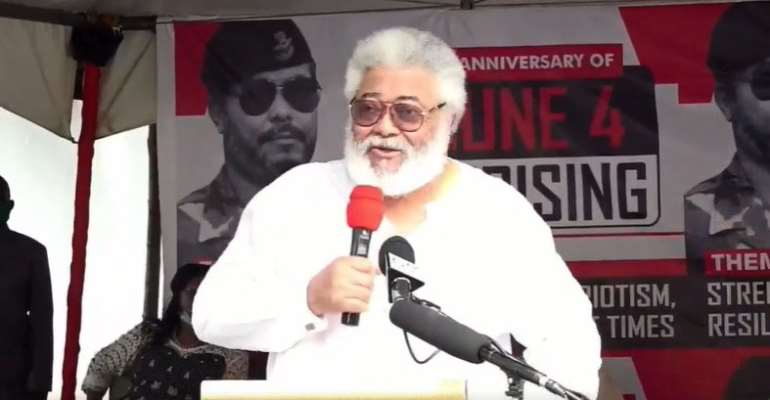 Ex-President Jerry John Rawlings's promise of a 'return match' with the Ahwois after one of the brothers, Professor Kwamena Ahwoi, authored a book titled 'Working with Rawlings', has commenced.

The book makes some scurrilous allegations against the National Democratic Congress (NDC) founder.

Mr. Rawlings yesterday described the author as serving tasteless and toxic dish he called 'dankwansere soup' on social media platform, Twitter, saying Prof. Ahwoi was trying to preempt a book he (Mr. Rawlings) was bringing out entitled: 'The Triumph of Evil'.

“There is nothing ill-timed about Kwamena Ahwoi serving 'dankwansere soup' at this time,” the former President fired, adding, “He needed to knock down Rawlings to preempt the exposure that Rawlings' book, 'The Triumph of Evil', promises to reveal about some of them.

“People like him do not expect the NPP to let go of 2020, so they are hoping to utilize the opportunity of a loss to damage Rawlings with some vicious, manufactured stuff.

Their cunning calculation is that Mahama and his running mate will step aside after 2020 while they consolidate their control over the party and provide their own flagbearer and running mate for 2024,” he revealed.

When the book hit the shops, the former President, in a brief initial reaction, appeared to be angry over some of the contents as put out by Prof. Ahwoi and even said that it was part of a grand scheme to take the NDC away from him.

He had said, “Much as I find it tiring and tedious to be engaging in self-defence when I have given my all all these years, I will soon deal with the callous agenda of bile by the likes of Kwamena Ahwoi, who are desperately seeking control of the NDC,” he said in a Facebook post.

“The NDC could, should and has survived on the authority of the word but if care is not taken, it will collapse and drown as has been happening, on the word of those in authority,” he added.

Prof. Ahwoi, who was appointed Local Government Minister during the Rawlings-led NDC administration because of his expertise in the area, has been going to town on the former President, making all sorts of allegations against him in the book.

He appeared to portray Mr. Rawlings as a leader who did not understand some of the issues they discussed at cabinet meetings and even claimed that while serious meetings were going on, the then military leader who metamorphosed into a civilian President would be playing with toys.

“As Bede tells it, when Rawlings and his entourage got to the entrance and the crowd surged forward to acknowledge their hero, Rawlings got hold of his testicles and squeezed them hard, so hard that he believed he fainted. When he recovered, he was outside the Congress Hall and people were fanning him,” he stated.

Prof. Ahwoi said when the former President was confronted on the matter, he laughed over it, stating, “I should have squeezed them harder.”

“I was informed by one of the persons I talked to while writing this book that in a number of his interactions with Jerry John Rawlings, he referred to the greedy bastards as vultures who needed to be gotten rid of by President Mills, but the President never budged,” he claimed.

He said in the book that Mr. Rawlings “wanted me and my brother, Ato Ahwoi, to betray Prof. Mills and constantly criticized the late President. Mills was going to resign on an account of the way Jerry Rawlings was treating him.”

Prof. Ahwoi said it all started when Mr. Rawlings in 2006 approached him and his brothers to find a replacement for Prof. Mills “who was supposed not to be well” as the NDC candidate.

“He approached my elder brother, Ato Ahwoi, to contest Prof. Mills in the NDC primaries and we took offence because Jerry knew the role I and Ato had played in getting Prof. Mills out of the comfort of academia to come and join the turbulence of Ghanaian politics,” he pointed out.

“He knew that there was a very close chemistry between us, especially Ato and Prof. Mills, and therefore as I have recounted in my book, I thought that he was asking us to betray Prof. Mills,” he added.

The former Local Government Minister said when Ato Ahwoi refused to accede to Mr. Rawlings's proposal, he fell on Eddy Annan who was also another close confidant of Mills, asserting that the late President was virtually living in Eddy Annan's house while he was the Vice-President.

He stated that when Rawlings failed to achieve his mission things started deteriorating, and noted that “it was from that time that we got upset and the drifting apart started. And it got worse when Mills became President and Jerry began his attacks on him.”