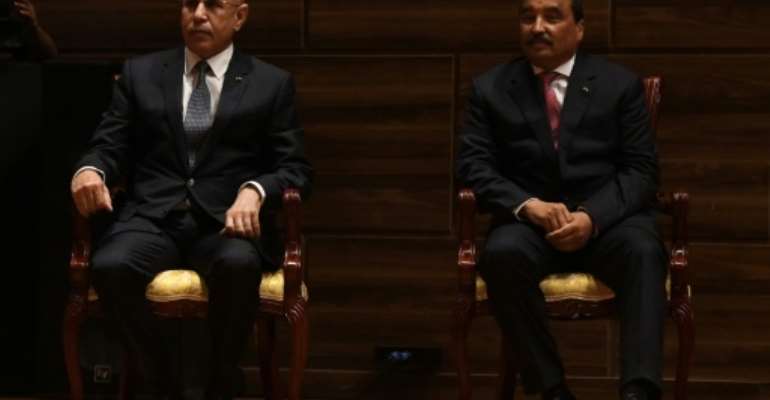 Former Mauritanian president Mohamed Ould Abdel Aziz, under suspicion over embezzlement dating from his time in power, was being questioned by police on Tuesday for a second day, one of his lawyers said.

The meeting came on the heels of a major government reshuffle and a parliamentary report on aspects of Aziz's 2008-19 tenure.

A security source on Monday said that Aziz went to the headquarters of the General Directorate for National Security (DSGN) after police went to his home, asking him to cooperate with investigators.

One of his lawyers, Taghioullah Aida, told AFP on Tuesday that Aziz "slept at the DGSN, where he still is, without the presence of his lawyer".

The interview with investigators "is still underway", Aida said.

The interest in Aziz stems from "major suspicions of maladministration and embezzlement of public assets", the security source said.

Aziz, a former general, seized power in the vast Saharan country in 2008.

He won elections in 2009, was re-elected in 2014 and stepped down in August last year, after Mohamed Ould Cheikh El Ghazouani, his former right-hand man and ex-defence minister, won elections.

Since his departure, Aziz has been kept at arm's length by Ghazouani.

In January parliament set up a commission of inquiry into his affairs and formally handed its report to prosecutors this month.

It was followed on August 9 by a government reshuffle that turfed out four former ministers whose names surfaced in the investigation, including ex-premier Ismail Ould Bedda Ould Cheikh Sidiya.

They have been "given the time they need to prove their innocence", said Adama Bocar Soko, in charge of the president's office.

Among the issues probed by the commission were the handling of oil revenue, the sale of state property in the capital Nouakchott, the winding up of a publicly owned food supply company and the activities of a Chinese fishing company called Pully Hong Dong, sources in parliament say.

Aziz failed to answer a call to testify before the commission in early July. Within weeks MPs approved a law to set up a High Court of Justice that would be empowered to try presidents and ministers in cases of "high treason".

The new prime minister, Mohamed Ould Bilal, was a minister several times under former president Sidi Ould Cheikh Abdallahi, who was deposed in the coup led by Aziz.