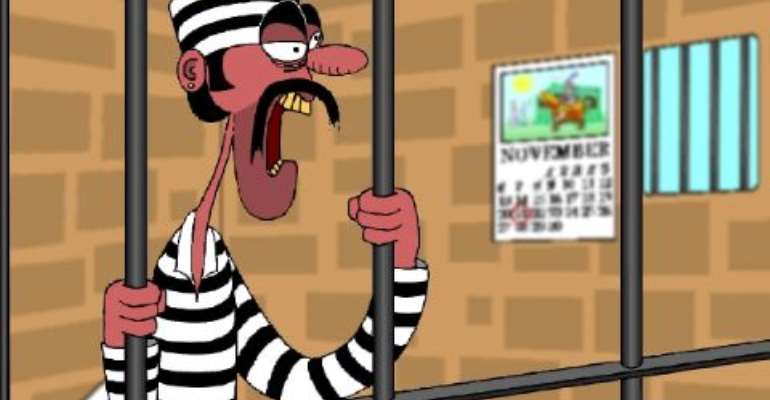 Five armed robbers were on Tuesday, sentenced to a total of 320 years imprisonment with hard labour by an Accra Fast Track High Court for conspiracy and robbery.

In the case of the four convicts, they were charged with conspiracy to commit robbery, but they pleaded not guilty to the charges.

The court, presided over by Mr Justice P. Baffoe-Bonnie, however, found them guilty of raiding a house at Parakuo Estates, Lashibi near Accra, at gunpoint and accordingly convicted them.

Before the sentence was passed, the court took a serious view of armed robbery and described it as a menace to the society and said as a result, those involved should be separated from the rest of the society.

It said the robbers were prepared for any confrontation when they attacked and if they had a second chance, they would not allow their victims to live and tell their stories.

Counsel for Frimpong prayed the court to deal leniently with him, since he was a first offender with children and not known by the law.

Similarly, Ababio asked the court to temper mercy with justice, since both his mother and brother had died as result of the case.

While Frimpong did not say anything when he was asked, Amewu said the court should have mercy on him because his family had disowned him due to the case and he had nobody to visit him in prison.

According to the facts of the case, the four convicts on April 23, 2002 at 2.30 a.m. attacked their victims, two men, at the Parakuo Estates with locally manufactured guns after they had tied the watchman to the house at the gate.

They then made away with various items, including a DVD player, an unspecified amount of money and other electrical gadgets which they took away in a BMW car packed in the house.

The car was sent to Domeabra near Konongo in the Ashanti Region, the home town of Frimpong, but the police were later led to the place to retrieve the car with a DVD player in the boot after the arrest of the four.

The court held that the denial by Frimpong that he was part of the robbery gang was untenable because he admitted that the car was brought to him for sale.

According to the court, the statement by Frimpong that when he went to test-drive the car on the Accra-Kumasi road, it developed a fault at Konongo was false because if the car did develop a fault, it would not have found its way to Domeabra.

The court held that if anything at all, the nearest place for Frimpong to get a mechanic to attend to the car was Konongo itself and not his home town and the fact that the police smoothly drove the car back to Accra without any fault made his case incredible.

The court further held that the three other convicts had a similar statement denying their involvement in the crime because they did not know each other, but that was false.

It said the fact that the four convicts went to the same house with guns to embark on stealing made them liable to both conspiracy and robbery charges.

Regarding the identity of the convicts, the court held that the prosecution relied on the confession statements, as well as exhibits found on Frimpong after his arrest.

The police said when Amewu was arrested he mentioned the name of Frimpong and led them to his (Frimpong's) barbering shop where he was also arrested and a search conducted in his room led to the discovery of a DVD player.

Frimpong told the police that the car was given to him by the other three convicts for sale and he led the police to his home town, where it was retrieved.

In the case of Ameshinu, the court found him guilty of robbing a journalist of Joy FM of his Ford car in September 2003.

The court said that as a young man, he could have put his energy to better use rather than being a menace to the society.

Ameshinu and others at large were said to have attacked the journalist who had closed from work and was returning to Tema and took away from him, his Ford saloon car.

The armed robbers, who were using a taxi, crossed the path of their victim and held him at gunpoint before throwing him out of the car after about 150 metres away from where they snatched the car.

The police retrieved the car, which was almost dismantled, from a house at Nii Boi Town after one of them had feigned interest in buying spare parts.

When the police visited the house, the accused said he was the caretaker and claimed ownership of the car, which, according to him, was sent to him by an uncle.
Audio File Available