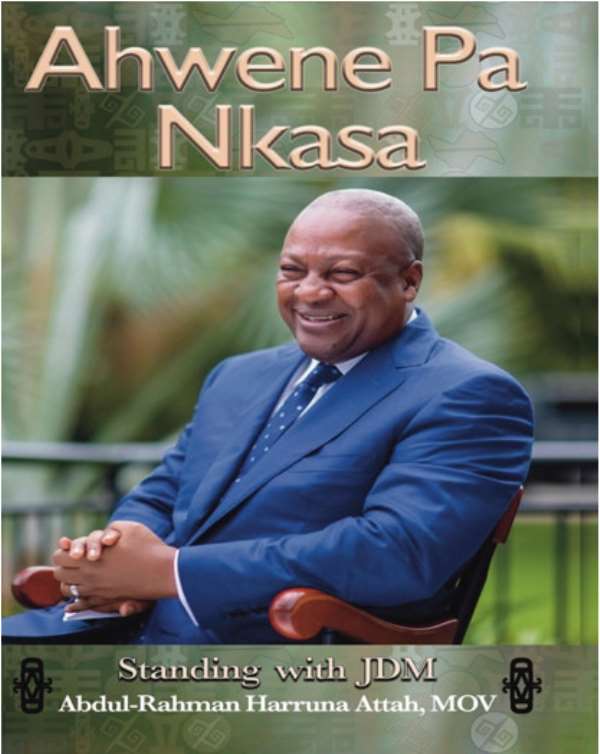 Ghana’s former high commissioner to Namibia and Botswana, Alhaji A Harruna Attah, a well-known name in Ghana’s media, political and diplomatic circles is launching a book on former President John Dramani Mahama. Alhaji Harruna Attah’s book is expected to generate a lot of interest in the story of the Presidential Candidate of the NDC.

The 331-page book with the title of “Awhene Pa Nkasa. Standing with JDM” is quite clear in this title that it does not intend to undermine the former president’s image but to burnish it. What is not clear is whether it was written to coincide with the 2020 Election Year.

It is in two parts, “The Homeland Briefs” and the “Diplomatic Briefs”. Independent of each other, they are held together by what the author calls the “Mahamarabilia” thread – a word he invented to describe his privileged proximity to the 4th president of the 4th Republic of Ghana.

Part One has 42 chapters that highlight events like Dumsor, Gitmo 2, Montie 3, Cheating at Elections, Lying and Blaming it on Mahama, Destroying friends and Family and much, much more…It also has intellectual discourses on Traditional Governance and the Ballot Box, Kigali (dangers that could be awaiting Ghana in this Election Year), Ebola and Covid-19 and the history of Ghana’s “coodetas” in new lights that would surprise and reveal…

Part Two, with 25 chapters, is devoted entirely to the author’s diplomatic service and reads sometimes like a coursebook on practical diplomacy and other times like a travelogue with intriguing insights. We come across his encounter with a sex change person (man to woman) and how his life was nearly cut short when his official car and ostrich crashed into each other on the highway from Windhoek to Gaborone. Part Two is so suffused with humour that it is difficult to tell whether he is pulling the reader’s leg or stating facts.

Most of the chapters are illustrated with unique pictures that could stand on their own as stories. It is a beautifully designed book, well laid out reader-friendly. For the first time, a modern version of adinkra, called adinshia, has had a public airing in the book…

Whatever your political persuasion is, your intellect will make you love this beautiful book on Mahama.

Issued by The PR consultants