Media brutality: Why The Media In Ghana Save Others But Not Themselves

By Isaac Piyuori, a student journalist at GIJ 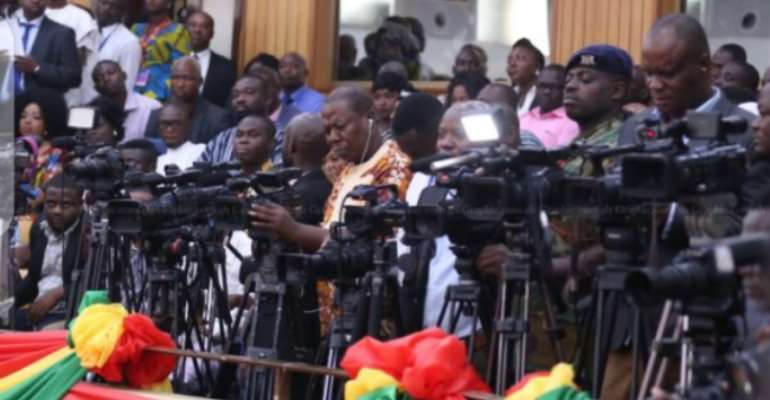 When I first gained admission into the Ghana Institute of Journalism (GIJ) in 2017 to pursue my dream of becoming a journalist, people made me feel I was choosing the wrong profession. While almost everyone who spoke to me believed and admitted to my passion and love for society and thought I would be a good journalist, they were not convinced of my physical and, to some extent, the emotional strength to accommodate the numerous and mostly unwarranted assaults and attacks journalists go through in Ghana.

They felt journalism was too risky and dangerous a profession for someone like me, who they considered physically not too strong. For them, to be a journalist, you need to have some level of mental toughness and be physically built to resist attacks. I was made to feel so unfit for journalism that at a point, I had to reconsider my decision, though I didn't change it.

The role of the media as a societal institution, I believe has been underestimated in Ghana, partly because of ignorance, lack of understanding of the media, and hugely out of disrespect and impunity. Out of ignorance and lack of understanding of the media, most people still think it is an institution made up of a group of few intellectuals and numerous school dropouts, unemployed and nosy people who have nothing to do and so go around looking to report on other people's wrongs. They think the journalist is the one nicely dressed and reading the news, while the dropouts are the reporters and cameramen.

And so, while those who appear on the screens and heard on-air are treated with a considerable level of respect, the rest are treated with sheer disrespect. Well, we cannot fault them. Ignorance is expensive they say. But maybe moving forward, people need to be educated to know that journalism goes beyond presentation and hosting programs. In fact, they should know that true journalism is going out to the people and reporting the good and the bad and most importantly the challenges, all in the interest of society.

People need to know that free media is not only important, it is a necessity for every democratic dispensation. The basis of democracy is a free and independent press. With a free, independent and of course a responsible media, citizen participation in the national discourse, freedom of expression, accountability, rights and constitutional rule can be guaranteed. Democracy is media freedom and so an attack on the media is an attack on democracy.

It is therefore unfortunate and a dent on the good image of Ghana, as the beacon of democracy in Africa, that people subject journalists to various degrees of assaults with impunity without any sanctions. It is even more unfortunate and alarming that most of these attacks are perpetrated by personnel of our security institutions, the police and the military, the very people who should be ensuring law and order. The very people whose duties are to protect and preserve the constitution are the ones abusing journalists and going unpunished.

While we continue to demand and hope that media freedom is respected and for assaults on journalists to be a thing of the past for the interest of our democracy and national image, I am convinced that the media themselves are not doing enough to end this canker. The media, I believe has not shown enough commitment and seriousness in the fight against media brutality. In certain jurisdictions, like the United Kingdom and the United States, an attack on even a student journalist on an assignment is an attack on the entire media and they don't rest until justice comes to play.

So why does the Ghanaian media seem to be good at doing everything and fighting for everyone, except for themselves and saving their institution? There are two ways to this: either the media themselves do not see the gravity of the attacks on journalists and their institution or they are getting certain things wrong. For me, it is the later. The media is unable to fight for justice and against assaults, because they are getting certain things wrong and also due to failure on the part of their professional organisations. Three things stand out in all these: unhealthy competition, dormant GJA and the “lets- give- it- to- God” disease.

How often do you here media houses in Ghana giving credit to each other? It is only in Ghana that you here and see statements like “…an Accra based radio/Tv station” without the name of the said media house in news reports. It appears to be an abomination to mention the name of a media platform on another platform. You see, the point I am trying to make is that, for some reasons, our media instead of complementing one another towards national development, see themselves in an unnecessarily fierce competition. And it has gotten worse that, they hardly give credit to each other on-air, let alone collaborating.

Truth is, we can only fight a common enemy with a united front. Competition is good but in certain situations, we should be complementing each other and not competing. The last time the media united in a fight against illegal mining (galamsey), we saw what happened, we saw how powerful they became. Consistency, intensity and uniformity are very key in advocacy journalism and that is what we need in the fight against media brutality.

Unfortunately, the Ghana Journalist Association (GJA), which is supposed to be the mother body of journalists, like the Ghana Bar Association(GBA) is to lawyers and the Ghana Medical Association (GMA) is to doctors, for some reasons has been so disappointing when it comes to defending media freedom and fighting for justice for journalists. While I agree that their legal status as just a professional organisation and not wielding too much power makes their work difficult, I strongly believe they can and should be doing better than just issuing press statements. Even if they don't have the legal strength to sue on media brutality and to fight for justice in the court, they can and need to unite all these media houses and journalists to fight for media freedom and for justice. The media do not necessarily need the court. We have the power, we have the microphones, the cameras and the pens which are enough for us to fight injustice and brutality against our profession, just like we do for others.

The last and for me most annoying of all the points is what I call the let's-give-it-to-God “disease”: the situation where people are caught red-handed abusing a journalist and instead of punishing them to serve as deterrent to others, we just decide to give it to God because they have apologised. Are we serious? We need to prosecute. God is tired of receiving issues of media brutalities in Ghana. Its time for people to face the law, whether they are sorry or not.

In conclusion, media brutality is something we should all be against. The media provides essential services to society and the least we can do is not subjecting them to brutality. Journalism is not weightlifting that one has to be physically built, as my people felt, to practice. The GJA should be more proactive in dealing with issues of media freedom.

For journalists and other media persons, I know off air we are friends, let’s know that we need to fight for ourselves and profession, just as we do for others. In doing this, consistency, intensity and uniformity are very key. Competition is good, but sometimes we need to complement each other. After all, the ultimate goal of journalism is to serve society and make it a better place.

The writer, By Isaac Piyuori, is a student journalist at GIJ

'Get rich quick' attitude among the youth eroding moral fabr...
2 minutes ago