No Homowo in London this year, we are shielding from Corocoro 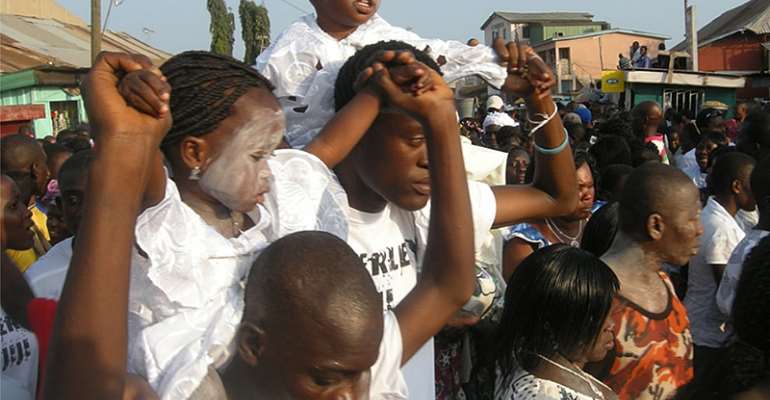 On Christmas Day last year I was challenged by a FACEBOOK friend to render AfehyiaPa in my mother tongue. She felt that all were greeting in Twi. I declined to take on the challenge, not because I was not up to it, but because I had just come out of church in very cold Croydon and was wondering what the day held for me indoors. My response was that she was confused and that on Christmas Day, the only greeting worth extending was a Merry Christmas and one would have to wait till the Scottish Hogmanay commences to wish the old year goodbye and welcome in the New Year with auld lang syne. Christmas is Blonya or Blofo Nya or the ‘white man is rejoicing’ so why should I wish anyone anything in my mother tongue. My view then as now is that it is not everything that one can translate into a local language, it would amount to cultural misappropriation. It would be a bit like people calling to wish you Happy Easter on Good Friday when Christ is still on the Cross.

I beat a quick retreat from answering her waiting for an appropriate to like now – Homowo to explain the richer poetry of verse and song of the Ga idiom; this is also to wish her Afi oo Afi! Yes, the Ga have their own way of wishing people a happy new year and it is not translated from the English and certainly not from a Twi translation from the English.

Homowo is the main in the Ga calendar of events, it is an annual festival a mixture of the worldly, the mystical, and the spiritual; for most of us however it is one big social event that got better at each stage. In my secondary school and university days in the 1960s, it was the major event that filled the social calendar from Nungua all the way to JamesTown and back again to Teshie during our long vacation.

It is an annual, not a seasonal festival and not celebrated every week or every six weeks. Like some holy festivals, it does not fall on the same day every year and sometimes the difference between two Homowo festivals can be as long as 380 days or as short as 340 days. The day appointed each year is determined by that intricate Ga calendar of 13 months and is dependent on the position of the stars and the sightings of the moon. These mystical systems, the names of the month we are told are all names of stars, continue to guide our fisherfolk on their tricky voyages on the sea, without as much a compass, and directs them as to where the ‘fish is plenty’ and how far to go out on sea and dictates to them why fishing is prohibited on Tuesdays.

The Twin rites festival in Accra

The Dantu wulomo is the recorder, counting the stones from one Homowo to the next and leading in the spiritual rituals of shibaa, nmadumo, nmafaa, nmaaku: farrowing, planting, transplanting, and reaping of the millet. These also include the nshɔbulemɔ, the sea purification event that the Anglican priests of old joined the many wulomei in performing. The secular stuff of the Odadao, lifting of the ban on noise making, the dancing of oshi and the sprinkling of the ceremonial kpokpoi is led by the chiefs and the community involvement of the Twin festival at Korle Wokon, aye ekoo, kpanshimo in Teshi and shankamo at La, are all part of this period of bringing the old year to an orderly end and ringing in the new Ga year that starts in September. It is only then that we wish anyone a new year, not at Christmas and not according to the Roman new year.

In years gone by I have celebrated Ga Homowo at Blofo Ashiee in my maternal family house at Jamestown and gone on to Krobo in Teshie, two weeks later to celebrate at my paternal ancestral house and when all that is done, I have invited my friends to my father’s house for all to join me in celebrating, what my friends term, the Sa Lone Homowo, my own appointed day when I can invite all my friends, Ga and non Ga, to join me on that day to partake of the ceremonial meal of new life.

Over the past thirty-two years, I have eaten kpokpoi, without fail every year in London at a public ceremony, – we bring new friends who are now family together in London, we invite others. In this election year, we would have invited the Ghanaian political parties to come and make their presentations and their handsome and massive donations.

Sadly, the year of COVID and physical and social distancing, the washing of hands and wearing of masks and this year, I am shielding, so the nearest I will get to kpokpoi is to go down to Forest Hill tomorrow and get some kenkey and take some container to get my medicinal otinshinu to fortify myself for the coming weeks and year.

So Amma Sarfo, it is not just Afehyiapa and afi nko na be tu yen and then finished – nothing else to follow. When the Ga wish you a new year, they do not have to translate from English or borrow at all, they do it with full idiom and flourish and a whole poem to boot!

Some things are best left in the rich idiom.