If Akufo-Addo Blew GHS69m On 9-month Trips, Why Can’t We Find GHS66m To Pay 5,500 Assemblymembers Per Annum — Mahama 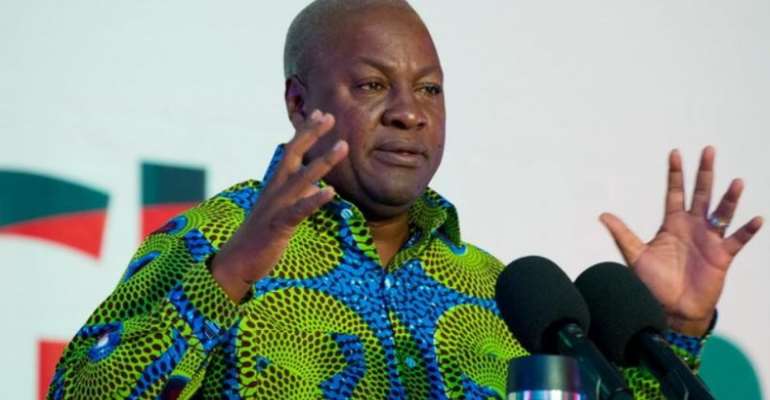 Former President John Mahama has said he will spend a minimum of GHS66 million a year paying the allowances of assembly members if he wins the 7 December elections.

According to him, if President Nana Akufo-Addo alone could spend GHS69 million on travels in nine months in 2019, then the money could be found to pay assembly members.

“I did the mathematics; elected assembly members are 5,500. If we give each of them GHS1,00O a month, that is GHS66 million a year”, the flag bearer of the National Democratic Congress (NDC) told party supporters in Mepe in the North Tongu constituency of the Volta Region on Monday, 17 August 2020 where he is touring.

“The President, in 2019, nine months, when they audited the accounts of the presidency, presidential travel alone was GHS69 million. Am I lying?” he asked.

“So, if the President alone can travel [for] GHS69 million cedis in nine months, why can’t we find the money to pay assembly members?” he asked.

“And, so, it is possible”, Mr Mahama asserted.

According to him, the money will be for work done.

“They are going to do a job for it”, he said, explaining: “We are going to involve them in the collection of births and deaths statistics”.

“And for doing that work, we’re going to pay them in the electoral areas and, so, that’s a promise we intend to meet”, he noted.

After Mr Mahama's promise to pay assembly members during a meeting with the Ghana Association of Assembly Members (GAAM) at his office in Accra, the Minister of Local Government and Rural Development, Hajia Alima Mahama, said former it was a rehashed 2012 manifesto promise of the National Democratic Congress (NDC) which the former President never fulfilled as President between 2013 and 2016 while in office.

Also, he pledged to design training programmes to improve the capacity of assembly members as well as pay them monthly allowances to encourage them to do more for their communities.

However, speaking at a sod-cutting ceremony of a project under the Ghana Secondary Cities Support Program (GSCSP) in New Juaben South Municipality of the Eastern Region by President Akufo-Addo, who is on a working tour there, Hajia Alima Mahama said: “I understand the former President, Mr John Mahama, met with GAAM, which is not an official association of assembly members, to start with, and he promised that when he wins, which is not going to be the case, he is going to pay assembly members a monthly allowance or salary”.

“To start with, the association that he met tried to organise when he was the President and they were prevented because they were told that there is a recognised assembly members association that is the National Association of Assembly Members of Ghana (NALAG), they prevented them, the New Patriotic Party (NPP) is democratic, we have allowed freedom of association and now the NDC is meeting them instead of (NALAG)”, she said.

The minister continued: “I want to tell you that John Mahama’s promise to pay assembly members was in their manifesto in the 2012 elections but he didn’t do anything about it. Now they have no argument against the bravest performance in decentralisation and local development, so, they are now promising ‘rooftop promises’ that they cannot offer”.

According to her, “Mr Mahama was not able to pay assembly members, about 10,000 in number” as well as “nurse and teacher [trainees’] allowances, so, would you expect him to put 10,000 assembly members on the payroll?”

“He [Mahama] knows it is impossible, the real situation is that the way the decentralisation scheme has been designed, they are like a board of the assembly and are not a full-time employee”.