V/R: ‘Desist From Profiling Us As NDC Party Agents; Respect Us’ – Volta Chiefs To Politicians 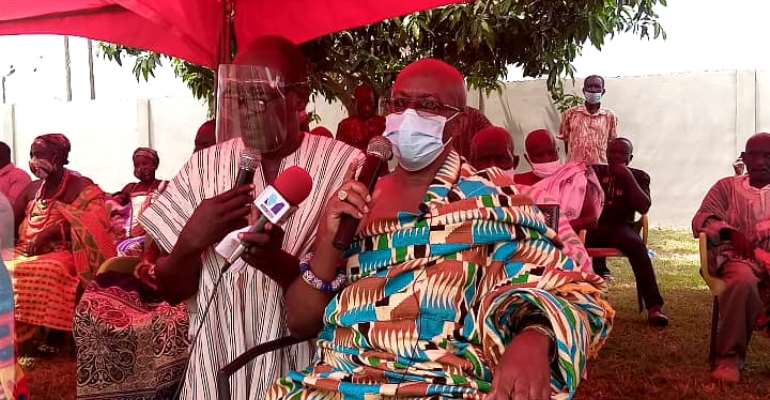 The Paramount Chief and President of the Battor Traditional Area in the Volta region, Torgbega Patamia Dzekle VII has called on residents of the region who are into politics to accord traditional rulers the respect they deserve while pursuing their party’s interest.

Torgbega noted that the traditional authority in the region is appalled by the behaviour and comments by some appointees in the current Nana Addo administration with regards to happenings in the just ended Voter registration exercise.

He said, “We talked about this yesterday when we met the Banda delegation at Togbe Afede’s palace. I hope our brothers from the Volta region, one day when you find yourselves in government you will give your Chiefs the due respect because we don’t have four years; Ministers have four years, even the former speaker had four years and there was an extension. The long and short is that, two Ministers from the Volta region were profiling us as NDC party agents. I don’t hold NDC party card, neither do I hold NPP, CPP or Kokonsa welfare party agent. Please, we deserve some respect, we.”

“For me to be labeled as a party agent is disrespectful. Before politics, chieftaincy was; we felt scandalized on Friday at the Jubilee House, for our own sons to be looking at us face to face because they wanted to look good before the President, telling us we are party agents, I think is below the belt, we are hurt too much. This afternoon, I will plead again that you give us that respect. We are not fighting for your seats, we have our own seats,” he added.

Torgbega made the comments while addressing a short ceremony of Chiefs and elders at Battor during a visit by former President and Flagbearer of the opposition National Democratic Congress.

Mr. Mahama who is on a four-day tour of the Volta region assured the Chiefs of the NDC’s continuous respect and partnership towards the development of the country.

According to him, his next government would embark on a massive job creation through the revamping of abandoned factories and industries, technical and vocational skill and agribusiness.